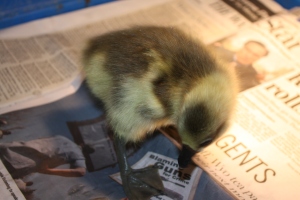 #4 got off to a rough start.  We discovered him quite by accident as we were returning from a trip to town.  Fred and Ethel were approaching their bathing tubs in the yard, and we noted Ethel’s absence from her nest.  She had four remaining eggs in her nest that would surely freeze in the grip of a winter storm that was blowing in.  As we hurried to the house, something else caught our eye.  A tiny gosling was struggling to keep up with Ethyl, and Fred was jealously guarding his entourage with hissing and frontal assaults.

#4 was only hours old, and had somehow managed to climb out of the goose house and travel with his parents a great distance over major obstacles for one so tiny.  As Ethyl bathed, he seemed at a loss.  He was too small to climb into the tub with her.   He huddled nearby, shivering with cold. Fred, who was doing his usual attack, hiss, squawk, retreat, and attack to keep us at bay, did something very cruel.  He attacked his baby with a glancing blow to it’s tiny head.  And the war was on.

Our indecision and reluctance to steal yet another of Ethyl’s babies was gone in an instant. We moved in to retrieve #4 and pandemonium ensued: geese were screeching, squawking, honking, flapping, and splashing, which drew the attention of Rosie, our dog, who joined in the fray. My husband was finally able to grab Fred and restrain him, and I was left to try to catch a terrified little goose and restrain Rosie from making a real mess of things. Ethyl was circling frantically, feathers flying and furious.  She managed to stay between me and her baby, as I flailed on my hands and knees, holding Rosie with one arm and trying to grab the gosling with the other.

I was finally able to clutch the tiny creature in my hand and tuck him inside my jacket.  We headed for the house, but not fast enough to escape Fred, who had been released on his own recognizance.  Several sharp bites on my backside caught me by surprise.  I yelled for assistance and Rosie came to the rescue as I beat a hasty retreat.

#4 was cold and exhausted, but received a warm, fuzzy welcome from his brothers and/or sisters (who knows which is which?)  Ethyl has returned to her daily routine, along with her jealous and devoted husband who, by the way, flunked fatherhood on a previous occasion.  Last summer, Ethyl’s first and only surviving hatchling succumbed to Fred’s attentions, and he won’t get another shot at harming his progeny.

1 thought on “The Little Gosling Who Could”