A mild, sunny day was the perfect opportunity for the four goslings, who were now three weeks old, to get a taste of the outside world.  Lucy, Ricky, Esty and McGill took a ride in the laundry basket to a little plot of ground in the front yard, where the winter grasses still had a few traces of green. Rather than grabbing a bite and grazing a bit (something Fred and Ethel do routinely) they seemed more interested in following “Mother Goose” along the temporary fence that enclosed them.  They whistled, chirped and peeped, racing back and forth as if trying to stay as close as possible.  This drew the attention of Fred and Ethel, who were in the outer reaches of the yard. Then things got really exciting.

The baby geese seemed not to notice the squawks and honks of Mom and Dad, who by now were on the other side of the fence, racing up and down looking for an opening.  Ethel flew at the fence trying to climb over, and the mayhem drew the attention of the guineas, who decided to join in. (A dozen guineas can create a cacophony that, if measured, would exceed the decibels of a jack hammer or jet engine).  Then the dogs got in the act.  Rosie was beside herself, trying to herd everybody in some direction, while the goslings, Fred and Ethel and the guineas all went back and forth and round and round in circles.

The whole scene was becoming unmanageable, so back into the laundry basket went the goslings.  Their freedom ride from the six-foot sheep tank they call home (they outgrew the rabbit cage) had come to an end.  Whether they enjoyed their brief visit to the outside world is hard to fathom.  What was apparent was Ethel’s determination to join her babies.  Later we observed her circling the yard again and again, trying to find a trace of the goslings.  She called out in her low alto voice that reminds me of a cello, and we felt sad for her loss.

Patience, Ethel, in a few short weeks you can rejoin your babies.  What we’re going to do with Fred is anybody’s guess. 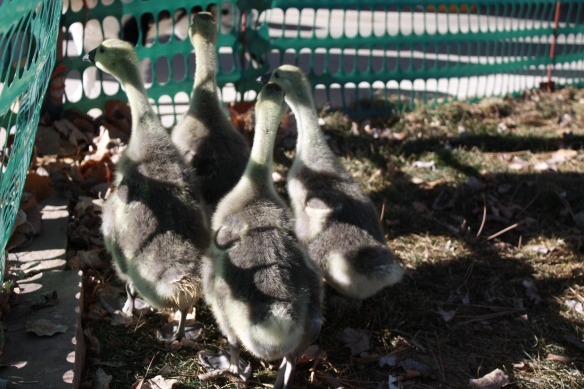