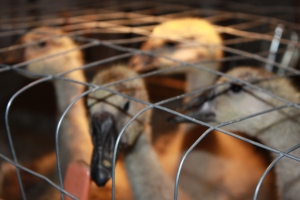 The care and feeding of animals is an awesome responsibility.  When you become the sole source for their nourishment, sustenance and protection, you make a commitment to see it through.  And the rewards are astounding.

Fred and Ethel, our Chinese geese, came to us by a circuitous route.  They were dumped on our pond by a neighbor, who rescued them from another neighbor who had moved away, leaving two ducks and the geese behind to fend for themselves.  We discovered them on our daily walk past the pond, and began leaving a little corn for them. It was late summer, and they seemed to be doing alright, however I had reservations about their long-term survival.  The ducks had puffy little crowns on their heads (I have not yet learned what specific category of duck they were) and they came to a sad end.  First one, and then the other disappeared, leaving only a trace of feathers and speckles of blood on the ground.  We could only speculate about the predator that caught up with them.  Coyote?  Fox?  Bobcat?  Racoon?

This left just Fred and Ethel to circle the pond and greet us for a daily ration of corn.  Soon Mickey and Minnie the muskrats joined in the fun, and pushed past the geese for corn, creating quite a skirmish, but that is another story.  After the loss of the ducks, I noticed in the evenings the geese left the pond and wandered into a nearby pasture where they settled in for the night.  They seemed lost and forlorn in their search for a safe harbor, and I listened in the night for sounds of distress, certain they would meet the same fate as the ducks.

Fred and Ethel perservered.  Autumn and then winter came. In November, a cold spell convinced us they were not doing well.  The pond had frozen over, and the geese stopped eating their daily ration of corn.  They sat on the ground, looking cold and entirely miserable.  We researched the Internet and learned their breed are unable to tolerate extreme cold below 20 degrees F.  There was only one thing to do.  We caught them and hauled them home.  The garden shed became temporary goose quarters, and with a heat lamp, they survived the winter.

In the spring we created a makeshift home for them in the calf warmer.  They settled in nicely, and we walked them to and from the pond each day. Ethel tried to nest down below the pond, but we had to gather her and her eggs and bring them home.  She was highly offended and refused to acknowledge her eggs.  Her next attempt was close to home and she hatched one little gosling. It did not survive, and suffered severe lacerations about the head and neck which could only have come from Fred, the jealous father.  And then she did something nuts.  She hatched four babies this January in the coldest, most miserable weather.  We were aware she was sitting on a nest, and we were reluctant to disturb her after all her previous travails.  We just didn’t think she would be able to keep her eggs warm enough for any of them to be viable.  Ethel fooled us, and the story of her babies has been well documented in previous blogs.

Yesterday, we moved Ethel’s four goslings from the house to the garden shed with a heat lamp.  Maintaining housing for baby geese is a challenge.  They initially out-grew  the rabbit cage, and then the sheep tank, and finally had to be moved to larger quarters in the same shed where Fred and Ethel first established residence.  We were able to pound metal posts into frozen ground to create an outdoor fenced area adjacent to the shed where they can wander around and get some exercise.  We were satisfied that we met this next challenge of raising baby geese as well as could be expected.  The next big question in our minds is how and when to incorporate them with Fred and Ethel.   How do we transfer the “imprint” from Mother Goose to their real mother, and how can we be sure of Fred’s behavior when left to his own devices?