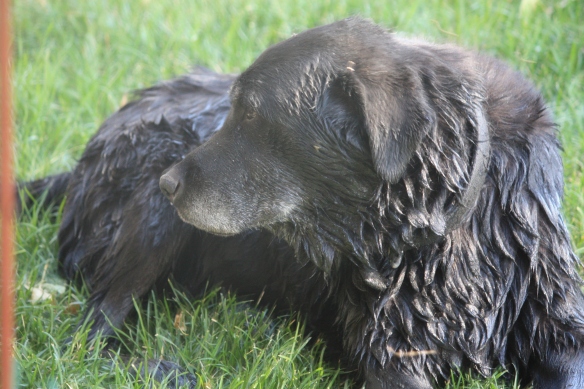 Lady, our elderly Labrador Retriever, came along on our daily walk and decided to take a dip in the pond.  Labs love water, and she frequently wades in to have a drink and cool off a bit.  On this particular day we were removing some young cottonwoods that were growing up along the edge of the pond.  We noted Lady near water’s edge, and it appeared she was enjoying the cool mud on her belly and just continuing to hang out there.

When we finished the job on the cottonwoods and were leaving to go back to the house, we didn’t think anything was amiss.  Lady moves pretty slowly, and when she didn’t arrive with us right away we were not concerned.  A bit later on, she was discovered mired in the mud, unable to extricate herself.  With some help, she was finally able to make it back to the house, where she settled down on the lawn looking like a bedraggled, mud-slimed creature from the deep.

A hosing off seemed to be the solution, and after a thorough dousing, she headed for her sleeping pad on the porch.  Before she settled in, however, she shook herself so vigorously I thought she would fall over.  And the fun began.  Dark, grey water splattered all over the concrete, the walls, the windows, the patio furniture and everything else within a 10-foot range.  I ran for some rags to clean up the mess, only to discover the stains left on the siding of the house did not budge.  What is this stuff?  I can only imagine in 100,000 years we will have oil at the bottom of the pond!

It took serious household cleaner, more rags, and about an hour to clean up the traces of dark water that showered off Lady as she did what dogs do when they are wet – shake it off!  Getting bogged down in the pond has never happened to Lady before, however the level of water has sunk about four feet this summer during a serious drought that has no end in sight.  It isn’t likely she will want to jump in for a splash anytime soon, and it will take  some time to restore her dignity.