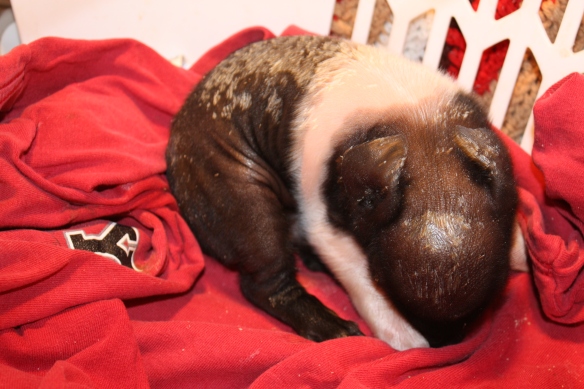 This tiny baby would fit easily in a large coffee cup.  She was delivered Cesarean on New Year’s Eve, along with two surviving siblings that are more than twice as large and much more vigorous.  This little “runt of the litter” hung on tenaciously to life for 48 hours before being rescued from a cage where she was housed with her siblings, who were tossing her around like a bean bag, gnawing on her, laying on her and submitting her to all manner of cruelties that the strong will perpetrate upon the weak. 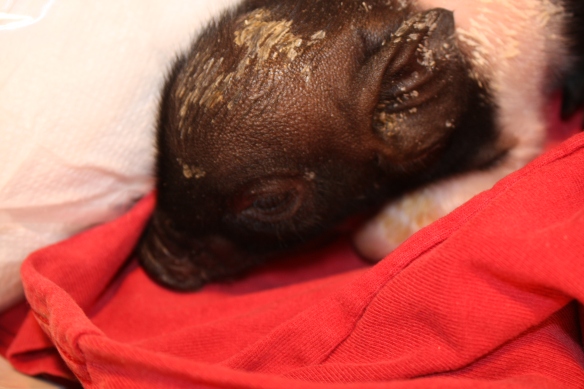 On the second morning of our “critter sitting” assignment, we found her near death.  She was not our pig, but we wrapped her tightly in a towel and buttoned her into my coat and carried her home in the bitter cold. We are caring for the little bum pigs, along with a menagerie that includes an aquarium of large fish, a cockatoo, four ducks, six chickens, a horse, two goats, a cow, a miniature pot-belly pig, three cats and a barn full of ten mature pigs, including one sow with four more babies, while our neighbors are away for a week.  Thank goodness they put their two larger dogs in a kennel and took their tiny little dogs with them!  We’re not certain we could keep track of any more feeding schedules. There is the added complication of our own barnyard of creatures to care for!

All God’s children need a name, and I decided on “Percy” for the little pig, who I mistakenly believed was a male.  Upon closer inspection, “Percy” became “Priscilla” and she is currently housed under a heat lamp in a laundry basket.    I borrowed a little plastic bottle with a pig-like nipple and some milk replacement powder to feed her, but she did not know how to suckle.  I found that I could squeeze on the plastic bottle and force milk down her throat, which she had to swallow, or choke, bless her little heart. After a few messy attempts, she finally grasped onto the nipple and began to suckle by herself.  A seemingly small victory, but one that looms large in the life of a frail little piglet trying to survive with a substitute mother and substitute food.  We’re keeping our fingers crossed.

1 thought on “New Year’s Babe is a Porker”