Tilly is eight months old and expresses her personality more each day–sometimes to our delight and sometimes to our dismay.  She can be willful, playful, stubborn and capricious.  She has also demonstrated intelligence and seems to understand when she really needs to behave and do what we ask of her.  Right before Christmas she turned up lame as we brought her into the corral for the night.  We kept her confined to the loafing shed/corral for several days to see if she would improve.  We also had her hooves trimmed for the first time and she behaved like a champ–but still limped and favored her left foreleg. 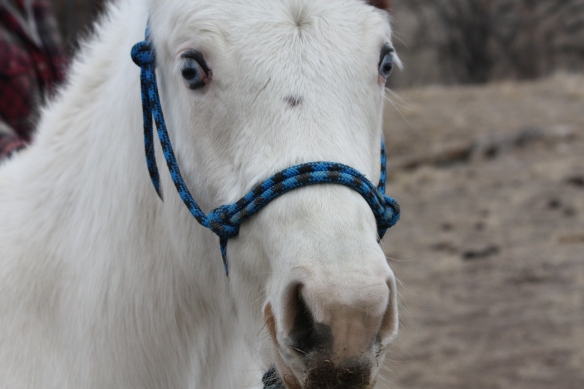 We had tried a dressing on her hoof to treat a possible puncture wound, which is commonly what causes lameness.  No definitive results.  Next we loaded her in the horse trailer for a drive to town for x-rays.  It was our first attempt to trailer-haul her, and she performed like a pro.  She was relatively calm at the vet clinic and didn’t spook at the strange sights and sounds.  The photos of the joint above her hoof revealed nothing unusual.  Her injury is apparently in the soft tissues and is similar to a bad sprain in humans.  We don’t know how long it will take to heal, and Tilly has been confined to the corral until we see more improvement.  That is hard for her to accept, as she misses her best buddy, Feedlot (Abe) the longhorn steer.

When Tilly goes out to run for a couple hours each day, Abe likes to clean up her left over hay and have a lick on her mineral salt block.  Then he joins her to roam the pasture and graze for dry winter grasses. Unfortunately, Tilly is now confined until her lameness improves, as she goes wild when she is turned out to run.  Poor girl, she hates staying on the inside looking out at Feedlot, and he hangs around waiting on his best buddy to come out to play.