Tilly has a new bareback riding pad cinched up on her back and doesn’t appear to mind!  We introduced it to her last week, let her smell it, chew on it and wool it around on the corral post.  When we placed it on her back for the first time during her daily grooming session, she showed no reaction.  Today we placed it on her back and gradually tightened the cinch around her girth and left her in the corral for the day.  We were expecting some fireworks but she did not appear to notice she had something new attached to her back.  We reasoned that, since she wears a halter and face mask every day (to protect her blue eyes from the sun and flies) that she accepted the riding pad as part of her daily routine. 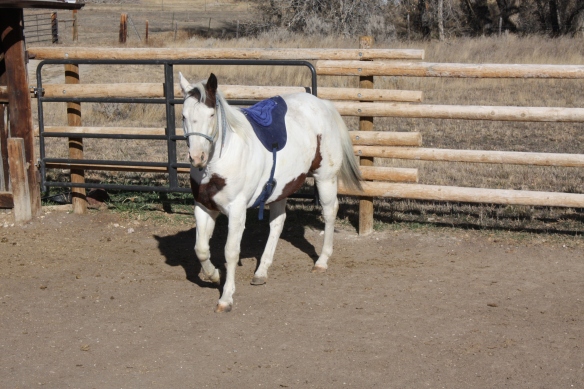 We elected not to start her out on a full saddle, which weighs a great deal more and has stirrups hanging down to frighten and annoy her.  We will lead up gradually to a saddle in the hopes she will adjust to new equipment installments in a calm manner and avoid an all-out rodeo of trying to buck and kick it off.  Hopefully, we can avoid injury to Tilly and the saddle in the process!  Our next venture will be introducing her to a bridle and we have not determined what exact style.  No rush–she is just now a two-year-old and we have lots of time.

This little filly can be stubborn and temperamental, but most of the time, she quickly understands what we want of her and cooperates.  She still hangs out with Abe, our longhorn steer, as well as paying daily visits to the neighboring horses for conversations over the fence.  Her one glaring behavior problem is refusing to allow a farrier to trim her hooves without a wrestling match that goes on for over an hour!  It should take about 10 minutes.  We’ve been through two of those guys and I guess we’ll have to figure out how to do this ourselves.  Our vet suggested a mild sedative might help. What do you say, Tilly?