This 100+ year-old barn has been hanging on even though it obviously has not received any tender loving care in a very long time.  About a dozen years ago I removed the old doors from the front and stored them for safe keeping, making myself a promise I would be back to restore the barn of my childhood memories.  Two years ago, we pulled up a trailer and emptied out all the “trash and treasures” that had been dumped inside for the last thirty years.  It was a daunting task and we didn’t get it all, but enough to make a significant dent.  I spent a summer when I was about 13 years old painting the barns, and this north wall still bears faded red paint.  And today we pulled off the sagging end that we will rebuild.  Ahem.

We tossed a rope and chain over the end in an attempt to remove the east end which had been pirated for lumber and left hanging in the wind.  We thought the 1 x 6 boards on the roof would snap like twigs, but what a mistake that was.  Everything BUT the roof boards snapped.  Ah well, no harm done, really.  We decided to move the end wall that came down over to a new foundation and start over rebuilding to meet the existing section. 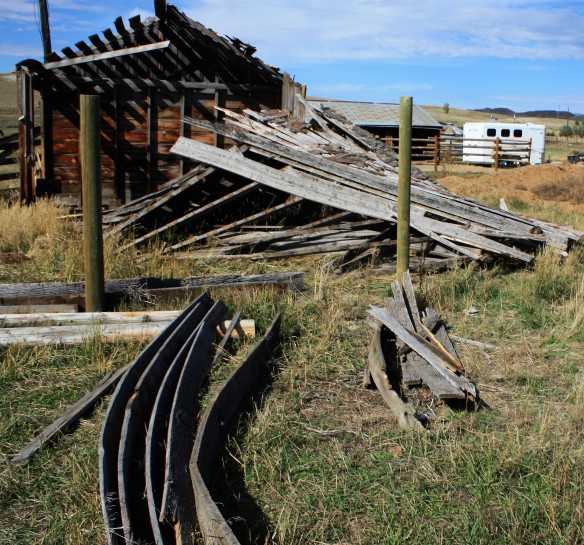 With a crow bar, I began prying off the boards from the wreckage to be used again.  The condition of the lumber is surprisingly good and I love the aged patina.  We will use all that we can in rebuilding the structure.

By the end of the day I had deconstructed every board, including rafters, support posts and wall boards.  I stacked it all in the order that I removed it.  And headed for a hot soak in the old bathtub–I ached in every place in my body.  Meanwhile, Michael has been all day digging post holes and pounding posts for a paddock we are building for Tillie.  Move over to make room in the tub! 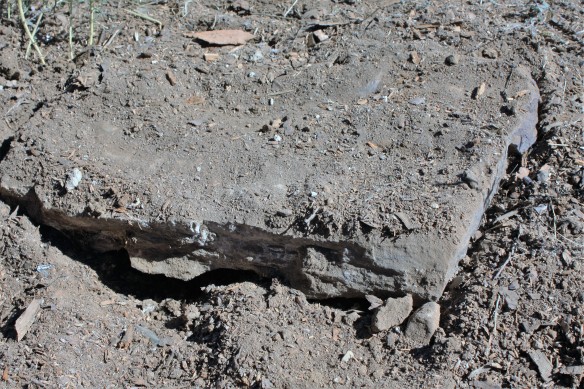 I had previously stacked a pile of foundation stones near the barn that I dug up from the foundation of an old log cabin that was eventually moved to the Gatchell Museum in Buffalo.  I figured I would need a few good stones to shore up the foundation when and if I ever got started on a restoration, and as I dug out the rotted floor boards and began removing old floor joists my shovel struck something very hard.  A few of the stones originally placed under the barn were still there, sunk down in the dirt and out of view.

We knew we would need to add structural support and strengthen the walls.  Working on the structure was making us a little nervous.  Half of the old building seemed sound and stood as sturdy as could be expected, but the end we pulled off was left hanging a bit precariously.  The decision was made to scrounge for structural supports in an ancient pile of leftover lumber nearby.  We found a telephone pole in good condition, cut off two 10′ lengths and began drilling holes for corner posts which we would fill with concrete.  We unearthed one more pole and are searching for a fourth to complete the corner posts of the new/old structure.  An antique oak walking beam Dad purchased in a load of oil field surplus many years ago still seems pretty sound and is long enough for a header front and back.  We will purchase new pressure treated 2 x 6 boards to lay across the foundation stones and build up from there.

This photo will serve as a reminder of what we started with.  Restoration will take some time, but I cannot wait until we can do the “after” photo.  As I look at this, I am reminded of what was.  And I am reminded of what a wreck our old chicken house was when we began to restore it.  The room on the west end (left) of the barn was the tack room where saddles, bridles and horse paraphernalia were kept.  The double doors in the middle opened to the barrels of rolled oats and animal feed.  The right hand section, sagging precariously, contained two horse stalls with built-in feed bunks. Lumber removed here many years ago left things in pretty bad shape.  A large corral and loading chute, long since removed, was attached on the right.

Why save an ancient wreck of a barn, with all the challenges, grit and grime?  Because it holds so many memories.  Because it is a good deal cheaper to salvage than build new. Because it speaks to the past and is part of our family heritage in this place for nearly 70 years. And because in the end it is worth it.