Maine is a long journey from Wyoming.  One does not expect to visit there and find much to remind you of home.  Imagine our surprise when we came upon this model of a schooner named Wyoming at the Maine Maritime Museum.  She was launched December 15, 1909 from the Percy & Small shipyard in Bath and was built for the coastal coal trade.  She could carry 6,000 long tons of coal with a crew of 12-14 and was the largest wooden sailing vessel built in the United States at the time of her launch. The scale of the model is 1/8 inch = 1 foot.

Maine was the ship-building capital of the United States . . . .

The above poster details  the mast design and lists some interesting facts: 1) launched after 8 1/2 months of construction; 2) contains 700 tons of white oak used in building her frame; 3) 2,300 tons of longleaf yellow pine used in planking, ceiling, clamps, waterways, keelsons, stanchions and deck beams; 4)  300 tons of iron and steel used in fittings, fastenings, and strapping; 5) lower masts were 123-foot sticks, 30 to 32 inches in diameter, of Douglas fir (Oregon pine); 6) 12,000 yards of heavy cotton canvas were used to make her sails; and 7) Wyoming was the largest wooden sailing vessel built in the United States, and the last 6-mast schooner built. 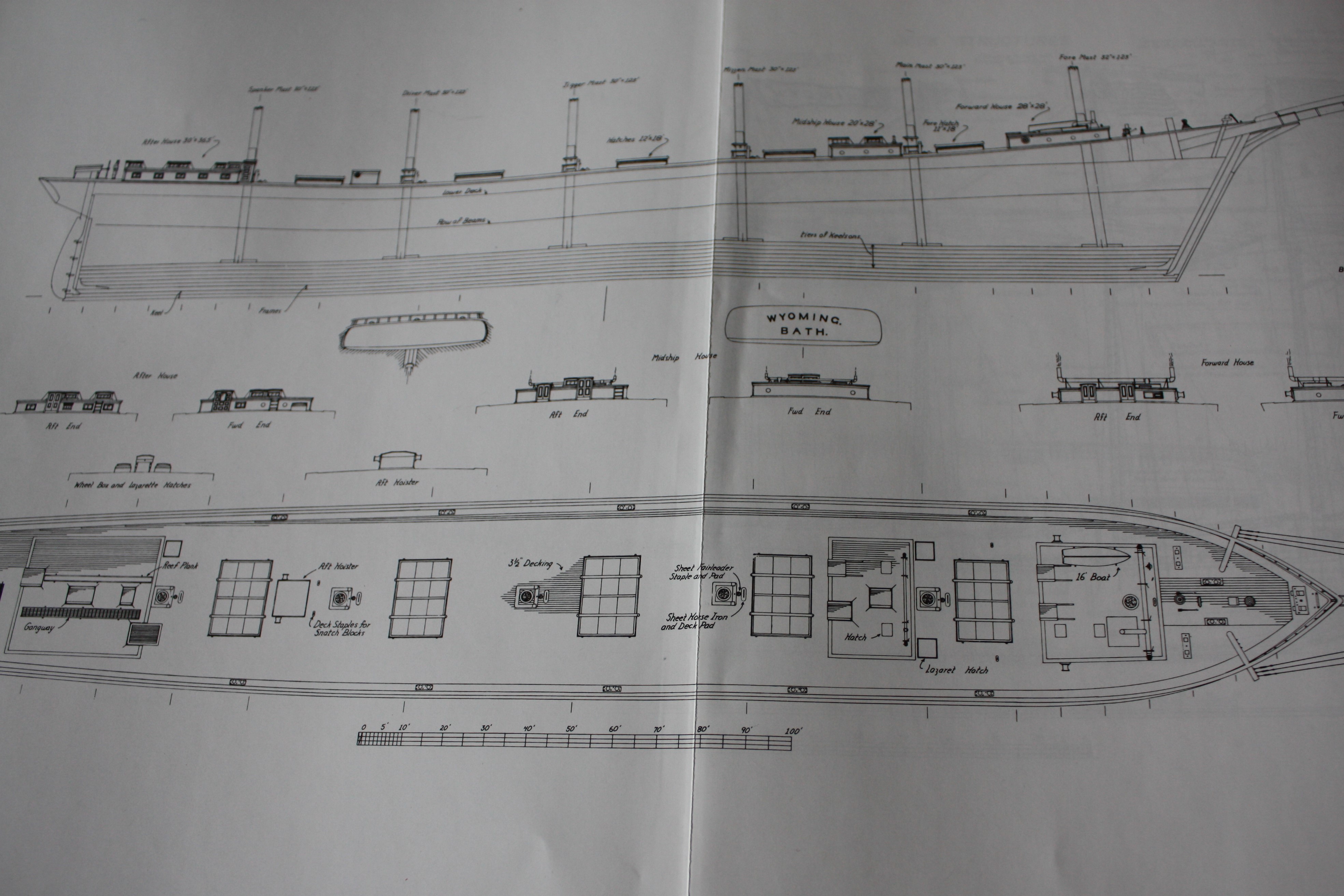 Under the vessel and on top of the groundways greased with tallow and cottonseed, carpenters installed “sliding ways” of timber. The cradle and hull of the ship were packed and fitted snugly into the sliding ways and the schooner now sat on a big sled perched on inclined greased tracks.  The Wyoming  would be gradually eased down the ways into the Kennebec River, which was no easy feat and required precision and coordination of a large crew of men. 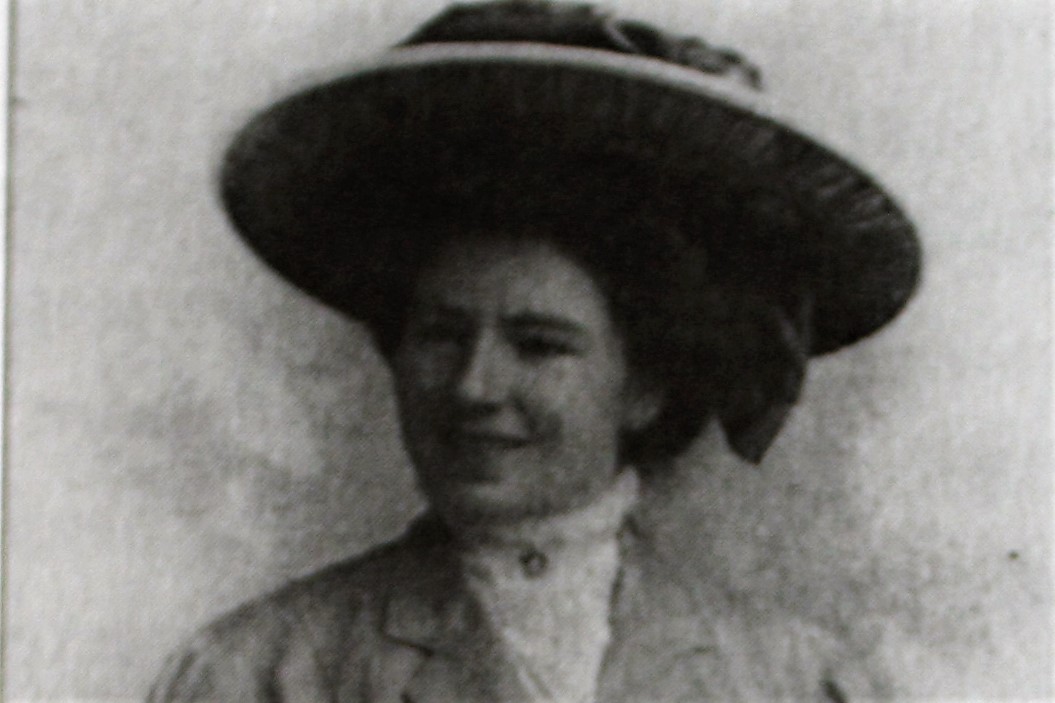 Lena Brooks, ” . . . dressed in a very stylish green rajah suit . . . ” pronounced the traditional blessing.  “I christen thee WYOMING,” and scattered a bouquet of flowers and ferns over the bow.  And who was Lena Brooks?  She was the third daughter of Governor and Mrs. Bryant B. Brooks of Wyoming and was attending Dana Hall, an eastern finishing school at the time.  She was granted the privilege of christening the Wyoming  because her father was governor of Wyoming from 1905 to 1911.  Governor Brooks wrote in his autobiography how ” . . . Wyoming and Maine joined hands in sending overboard the finest craft of her class that the world had yet seen. . . .”  The Percy and Small ship-building company had been very successful in developing interest and Western capital for Eastern shipping!

Governor Brooks and a group of investors acquired interest in some of the older vessels of this same company and then signed a contract for the building of the Governor Brooks, in 1907.  It was a successful venture and his initial investment was paid back in full in dividends by July 11, 1916.  Governor Brooks wrote that ” . . . during the world war our company sold the entire fleet of sixteen vessels, of which I had an interest only in four or five, to some government for colliers.  On September 12, 1917 I received payment for my interest in the schooner, Governor Brooks, sold through the Percy and Small Company, Inc. , ship brokers of 52 Front Street, Bath, Maine. . . .”

The Wyoming, which had been launched in 1909, also paid good dividends and was disposed of with the fleet in 1917, returning Governor Brook’s capital investment.  He wrote that “seven years later, the Wyoming went down off Chatham, Massachusetts, in a terrible storm.  That very night my wife and I were on the stormy seas between Halifax and New York harbor returning from a trip to Europe.  The next morning we were greeted in New York by glaring headlines across the papers, about the tragedy of the Wyoming.”  The entire crew was lost March 11-12, 1924 near Pollock Rip between Cape Cod and Nantucket Island.

Perched on the grounds of the Percy and Small Shipbuilding Company, which is now part of the Maine Maritime Museum, sits this life-size sculpture of the Wyoming.  It was dedicated on the 100th anniversary of the Wyoming’s launch in 1909.

Governor Brooks, in his autobiography, wrote that ” . . . .Captain Charles Glaesel of Boston, who commanded the vessel, had a crew of twelve, and was bound from Norfolk to St. John, New Brunswick, with five thousand tons of coal.  No survivor was ever found to tell the story of her disaster.”

Imagine my surprise (and good fortune) when I learned that my cousin was looking for a project and agreed to take on the Wyoming. Starting from some of the drawings I sent him, and working with all his original materials, he re-created the Wyoming and drove from Oklahoma in early June to deliver her. I don’t know how I will ever repay him for such a gift!