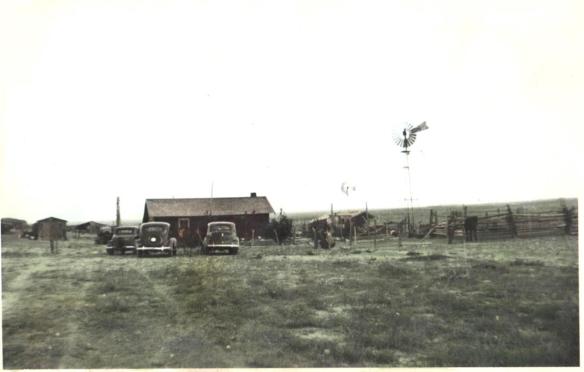 Samuel Ullery and his son Ernest filed on homesteads in an area known as Nine Mile in 1921, receiving patent and the seal of the General Land Office authorized by President Calvin Coolidge in 1924.  Samuel had “proved up” on 480 acres and Ernest on 320 acres.  The home pictured above was built from logs hauled from the Mayoworth sawmill.  It consisted of two large rooms with a full porch that extended the length of the house on the east. This photograph was taken of the west side.  Unusual in early-day construction in the area, the exterior of the logs were covered with cedar shingles on all sides.  The Ullery family compound included this house, as well as the home of Samuel and Clara, and later on, the home of newlyweds Jim and Nella Ullery.

The group standing in front of the porch appear to be holding recently killed birds.  I don’t know who the members of this party are, or what kind of birds they are holding.  My grandmother raised a huge flock of chickens and turkeys, so perhaps this was a sale transaction with neighbors.  Note the cold frame resting against the foundation where she likely grew some lettuce or other vegetables during the colder months.

Until recently, this is what remained of Ernie and Clara’s homestead house.  Ernie had it relocated from Nine Mile in the late 1950’s to ranch headquarters on Dry Creek.  And there it has been, still resting on temporary supports, all these years.  A microburst windstorm tore the roof off four years ago, which shot down any plans I might have had for restoration.  The porch had collapsed many years ago and hangs on the side of the house.  But still . . . . 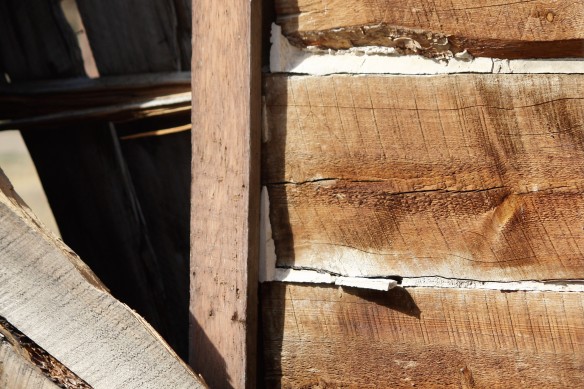 The chinking is falling out but the logs look like they could be reclaimed, if I could figure out how to dismantle them and reuse them.  The only ones with serious rot are along the top of the structure.  We decided to start cleaning up the site last month on a couple of nice days (rare in March).

The boards are tough and tenacious – we finally had to hook up a rope and pull the remaining porch structure down.  It didn’t help that a currant bush loaded with spiky thorns was standing in the way!

A pile of boards literally full of nails grows on the side.  I love old wood and will find some way to recycle most of it, similar to what we did with Granny’s old poultry shed.  Much of that salvage went on the old horse barn we restored last spring and appears to be holding up well.  The age, color and character blend well with the existing structure and the whole appears to have been standing forever, except for a few new boards that had to be added. 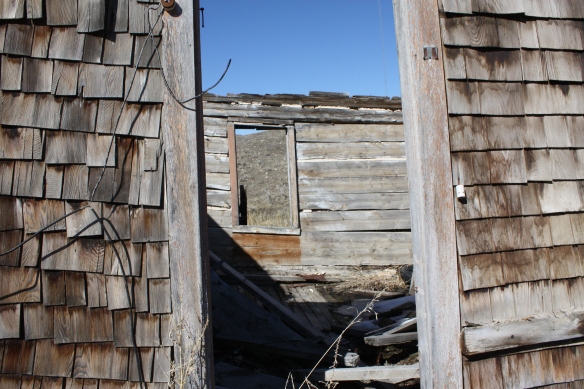 What stories could be told of the lives herein from 1922 until about 1940 when the family relocated.  They could survive the depression in the thirties, but not the dry years that brought no rain.  When the reservoir that irrigated the garden and two wells that furnished a little domestic water dried up, it was time to move on.

What I have trouble understanding is why, after moving the sturdy log structure from Nine Mile, my grandparents didn’t restore and live in it when they retired, sold the Telephone Store in Kaycee, and moved to the ranch. They purchased a new mobile home, incurring far greater expense than it likely would have cost to restore the old cabin to its former glory.  When it was relocated in the late 1950’s, it was still in very good condition.  Oh well, it was an opportunity lost that makes me sad.  I must do something to save what I can of the remains.

This little cottage was relocated at the same time as the log house.  We used it as a bunkhouse for a string of hired hands and then for storage.  Restoration is detailed in a previous blog post, and not a day goes by that I don’t look upon this little house and feel glad that I saved it.

Little house on the prairie.

1 thought on “Home On The Range”