An old Ball canning jar, turned blue with age, contains a collection that my grandmother stashed over the years.  I found it among her things and saved it in tact.  Being the family collector, there was no way I was going to part with it.  It has resided in an antique book case, along with many other family artifacts. Inside the jar, a sewing kit called  the “Happy Mender” contains a variety of thread and a needle.  Frank A. Barrett, Republican for Congress, added a slogan to the kit that reads “Let’s sew up the re-election of Frank A. Barrett.”  The flip side of the kit lists his qualifications:  Able; Efficient; Experienced; Served World War 1.” 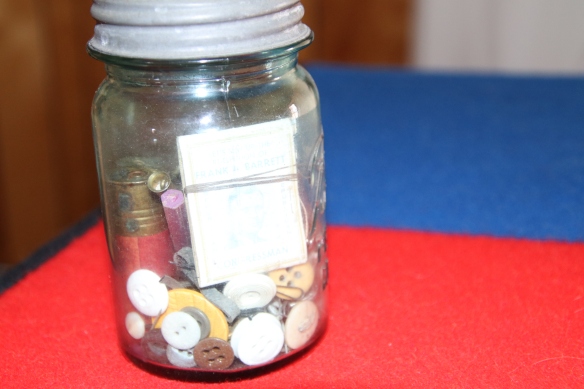 Beyond the sewing kit is a wide variety of incidental items that would have been picked at random for the jar:  three shotgun shells; two thimbles, (one with an inscription “Butternut, the Coffee Delicious” and the other with “Natrona Motor Company, Housley Ford);” USO and Red Cross pins; zipper pull; dress hook;  red plastic die; safety pins in various sizes; hair pins; straight pins; pencil with red lead; brittle rubber bands; key to open tins of meat; curtain rod bracket; and an assortment of buttons of all sizes and colors.  A slender, 4-inch brass tool was included – we have no idea what it was used for.

The assortment of items my grandmother collected gave me a peek into her life. I see her going through her daily routine as a wife and mother on the homestead at Nine Mile during the 1920’s and 1930’s. I do not believe she ever fired a gun, so the addition of three shotgun shells is a puzzlement.  I cannot know whether she was really fond of the sewing kit or the political candidate who gave it to her, but she kept it for 40 years.  Our family didn’t have a lot of discussions about politics–it was usually cattle prices and commodities.  I always believed Granny was a solid Democrat because I remember her fussing and stewing in the kitchen at the Telephone Store, worrying that Adlai Stevenson would not get elected for president.  But a woman has the right to vote her heart, not the party!

I decided to take a look at the Honorable Frank Aloysius Barrett.  Of Irish descent, he served in the Wyoming Senate from 1933 until 1935.  He stood for Congress in 1942 and was elected to the House of Representatives until 1950.  I cannot determine which of his campaigns for re-election to the House would have generated a “Happy Mender” sewing kit.   In 1951 Barrett became the 21st governor of  Wyoming and resigned in 1953 after he was elected to the U. S. Senate where he served one term.

Nella, Jim and Clara Ullery circa 1938

Granny Ullery standing (right) beneath the wind mill on the homestead at Nine Mile.  She moved to Kaycee in the late 1940’s when she and my grandfather acquired the Telephone Store.  Her button jar went along, then moved back to the ranch with her in the early 1960’s when she and Grandaddy retired.  I will leave her button jar in the old book case for the next generation to poke around in.