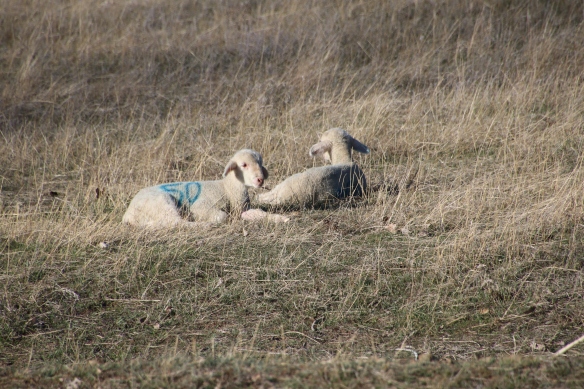 Young lambs take a rest across the fence in our neighbor’s pasture.  It is great fun to watch them and brings back memories of my involvement with sheep as a youth.  Each spring we would end up with a dozen or so “bum” lambs whose mothers refused to nurse them.  We assumed the ewe’s reaction was to having too many if she had triplets, or for a variety of reasons only she knew. 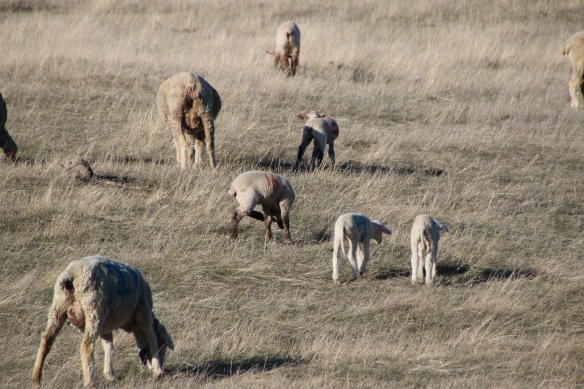 The survival rate of bum lambs is not great, and my heart was broken over each and every one that died.  We fed them with soda bottles with a specific black rubber nipple attached.  We mixed up their feed from a powder mixed with water that was formulated for infant lambs and they were always so eager to suckle.  As they grew, they would jump up and practically knock me off my feet trying to reach the bottles I held.   Their little hooves were sharp and left a mark.

On mild spring evenings I would let the lambs out of their pen and take a walk with them.  They would follow closely behind, stopping to nibble green grass and ramble around.  I am certain they were so happy to be out of their pen to explore and play, which was hilarious to watch.  Similar to young goats, they love to frolic, leap and jump in the air, calling out to one another. 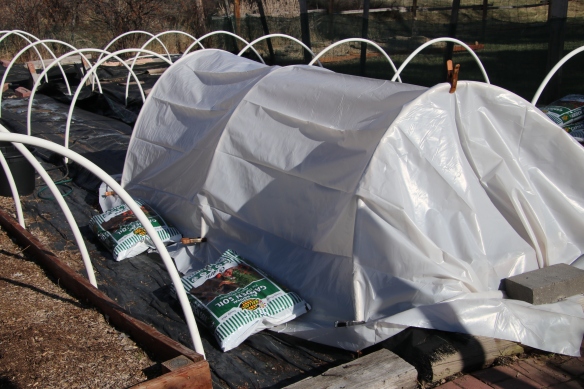 Getting a jump on the garden requires a strategic early start as the growing season here is very short.  Inside this tent is lettuce, kale and spinach, cool weather crops that will mature early in the season in time for another planting.  Spring is our busiest time of year and gardening requires a major commitment and chunk of time if we are to be successful. 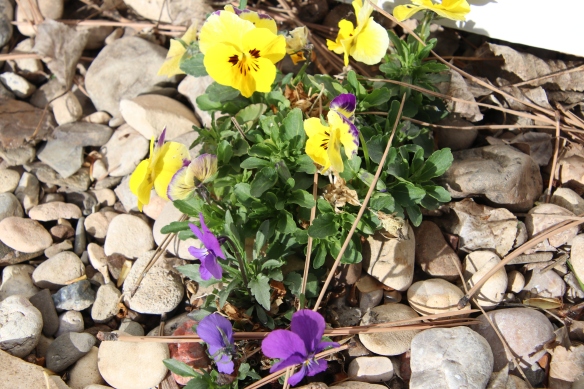 Volunteer pansies peep out from a rock-lined path on the east end of the house.  They arrive early to remind me that they are tough enough to endure our spring weather, which means they will likely see snow and frost into June.  I recently planted a couple of flats of pansies in large pots around the house, confident that my volunteers know what they are doing and I will follow suit. 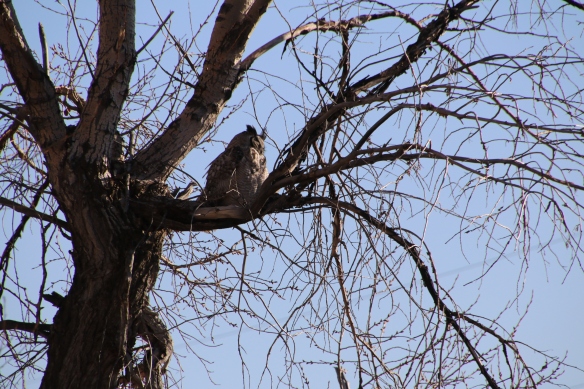 Great Horned Owls live in the cottonwoods in the creek bottom and each spring they keep a vigil in the tree tops. Beginning in January nesting pairs will begin to serenade each other in a lovely duet each evening, with the male uttering five or six resonant hoots: Hoo!, hu-hu-hu,Hoo!Hoo!  The females’ hoots are shorter in sequence and may just be a single Hoo!  In March and April one owl can usually be heard singing softly in the early morning, and in May the piercing “scrawk” of baby owls can be heard overhead.  If all goes well, the young owls will fledge by the end of May and move away from the nest.

A group of does and yearling fawns hang around the yard checking out the forage.  Before long the does will hide in the sage and pockets of scrub in the area to have their fawns and we won’t see them for awhile.  The yearling fawns will appear a little disoriented and scatter about, looking for a new connection while the does give birth. I love seeing the baby fawns when they come out of hiding.

A pair of Mallard ducks have adopted the pond that has formed in the creek bottom.  They appear each day to swim and browse, and we believe they have a nest nearby.  Spring brings forth new growth, new life and new expectations.