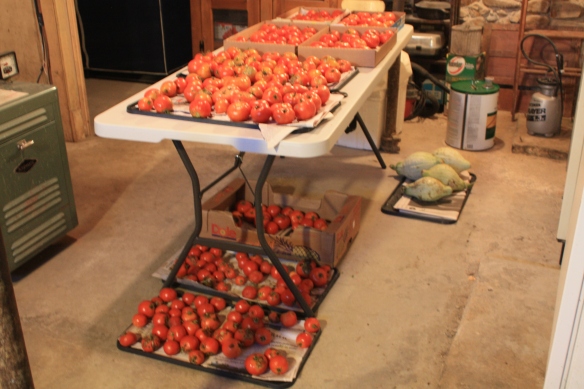 Is this a bountiful crop, a mere over-abundance of tomatoes, or a disaster?  Forty pounds of tomatoes have already been processed into marinara sauce, salsa and plain preserved tomatoes in quart jars.  I am running out of storage room, jars, ideas, and patience.

These were picked October 19th and will need to ripen awhile, which means I have to move a load out of the “ripening room” to open up storage space.  Have given sacks of tomatoes away to friends, neighbors, and relatives.  When we pick one with a bite out (slugs, birds, whatever else resides in the garden) we toss them to the little flock of chickens next door. They love them and race to compete for the first bite!  At this rate, we’ll have red eggs.

My first attempt mid-May with three small tomato plants met with disaster.  The temperature dropped to 23 degrees and even though they were under a row cover, with a light bulb to add a little warmth, they froze.  I reasoned the ground had not yet warmed enough to sustain them.  We checked with local nurseries and could not find the plants we desired, so relied on a friend to pick up three plants we found in a Colorado nursery.  Got those in the ground the end of May and decided to go online for six additional plants from Burpee.  They arrived early June and we finished planting the rest of the garden shortly after.   Who knew?  Everything we planted in the garden did very well, but the tomatoes exceeded our expectations.

We were still waiting for the last batch of green tomatoes to ripen when the floor fell out and the temperature dropped to 17 the night of October 25.  I forgot to plug in the light bulb (was this a conscious or unconscious decision?) and most of them were lost to the freezing nighttime temperature.  We cleaned up the garden a couple of days ago except for the carrots, beets, Swiss chard, kale, spinach and lettuce, which are still producing.  It seemed so wasteful to scoop all the frozen tomatoes into the trash, and my granny would be clucking at the disgrace of throwing away food!  Ah well, I’m still re-learning some of the old lessons.

Next year, I think we’ll cut back from 9 plants to just 6.  Who knows what will happen?