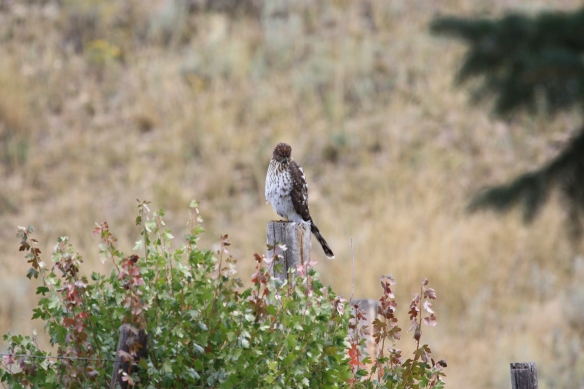 This spectacularly beautiful bird arrived in the garden and settled in on a fence post for a lengthy visit.  Rosie spied it first and when I noticed her staring intently at this strange visitor, I ran for the camera.  This bird, which we have tentatively identified as a prairie falcon, is exactly like one I found a week earlier.

I was relocating a sprinkler on the lawn when I discovered a bird on the ground, partially covered by the lower branches of a spruce tree.  It did not move and had died fairly recently. We gathered it up and after a closer examination, we could find no trace of injury or violence that would have contributed to its death.  It had obviously crawled up under the tree branches for protection and concealment, then died of some complication.

The beautiful markings under the wing span are similar to the chest area, and I regret I did not photograph the dead bird.  We called the local game warden and he came to retrieve it for further testing.  We already suspected that we could not keep the bird’s remains in our possession, and the warden confirmed it.  He thanked us for surrendering a protected raptor and said it would likely be tested for a virus.

My speculation that the bird I photographed was a mate of the poor creature I found in the yard the previous week is as good an explanation as any.  We had never seen this particular species near our home or outbuildings.  It lingered for half an hour and flew off and has not been seen here again.