The weather forecasters weren’t joking when they warned of a “polar vortex” arriving in the northern Rocky Mountains.  After 48 hours of howling winds and blowing snow, we were left with some 3-ft. drifts and plenty of misery all around.  We observed Veterans Day digging out and dressing in every item of apparel we could layer on to take care of animals and daily chores.  The high temperature for the day was 5 degrees above, but that felt like a heat wave compared to the low last night of -27 degrees.

This young buck mule deer was outside the window yesterday working on a pile of leaves and twigs I raked up and have not had a chance to burn.  Foraging for enough food to keep warm is a challenge, and although I know we are not allowed to feed them, it makes you wish you could toss out a bale of hay to help them out. 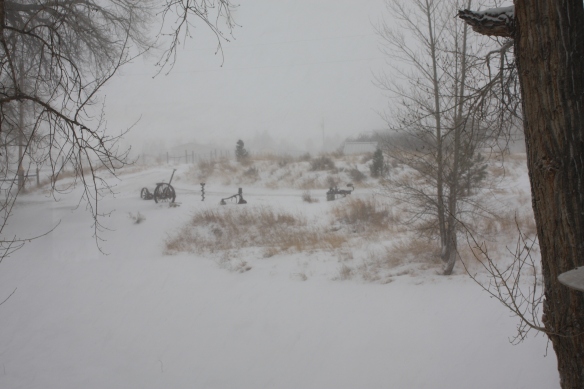 We had some wet snow Sept. 10 and regular frost since then, but it has been a lovely extended autumn until we got slapped alongside the head with this storm.  The carrots didn’t get dug and I am hopeful I can still save them.  They are blanketed with a foot of snow but the temperatures are predicted to be even colder tonight.  The rest of the garden is probably finished.  Goodbye to my tasty spinach, kale, chard and lettuce crop.  Finished canning as many tomatoes as I could stand and donated the overripe remains to the chickens and the pigs next door. 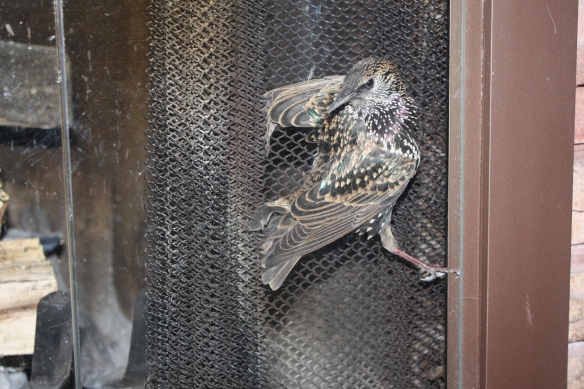 We were taking a late afternoon break with the news when we heard a strange rustling sound.  We thought it might be snow sliding off the roof, but a quick look outside revealed no disturbance in the snow drifts surrounding the house.  A quick trip to the basement turned up nothing unusual. A little later Bleu and Rosie approached the glass doors on the fireplace with great interest and Bleu jumped up on the hearth to get a closer look.  A very angry, frightened starling was glaring at us as if to say “what the heck happened?”  Was he seeking a little warmth atop the chimney and accidentally fell down into the fireplace?

The evening fire was laid and a few bad jokes flew around about what the poor bird would do if we lit it.  Baaaaad jokes.  To the rescue with a large plastic bag, I reasoned I could catch the bird if I opened the doors very carefully.  The starling crouched behind the logs until the coast was clear and swooped out so fast I had no chance.  He bounced off the ceiling, into the bay window, and made a crazy pattern of flying amok in all directions trying to find an exit.  On to the kitchen, he bounced into the kitchen window so hard he fell into the sink and I had him!

I took my plastic bag outside, confident that I had a bird inside, and opened it to release him.  Stunned, he just sat with his beak slightly opened and panting as if he had run a marathon.  I stepped back inside to grab a coat, and decided I should have left him in a more protected spot to keep him from freezing before he was able to collect his wits. When I returned, he was gone.  He will have some tall tales to tell about his misadventures, but he likely won’t try to keep warm in a chimney anytime soon. 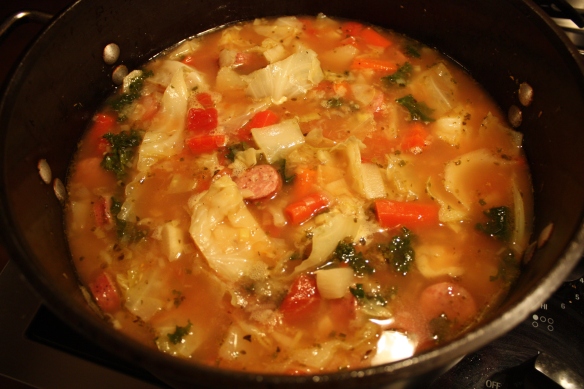 Winter root vegetables, cabbage, kale, leeks and Polish sausages made for a hearty stew which warmed us after fighting snow and ice all day.  Now all we need is to light the fireplace (now that the starling has departed), pour a glass of red, and enjoy what the winter will bring.