Cattle rancher and politician John B. Kendrick began construction in 1910 on a set of stone buildings on the west bank of the Powder River on land he purchased from A. J. Collins in 1902.  His goal was to consolidate his other ranch holdings–the K and the OW, which stretched across the Wyoming state line into Montana, encompassing a vast empire of 210,000 acres.  It was a full day’s ride from the OW in Montana to the LX Bar.

The LX Bar brand was originally owned by the Stanton-Howard Livestock Company that ran cattle along the Powder River as early as 1878.  The brand passed on to Collins, and then to Kendrick, who set up a spectacular ranch headquarters that stand today as a testament to his ambition. 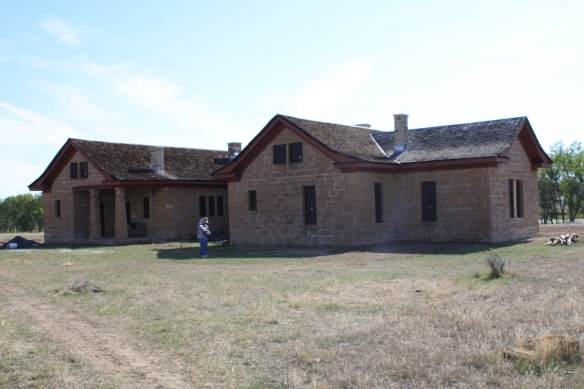 The Powder River can be seen in the background and carves out a wide river bed that ebbs and flows, changing course with the seasons.  A long porch extends along the entire east side of the house, facing the morning sun and the river.   Master stonemason Oscar Husman was hired to build the five- bedroom house, bunkhouse, main barn, processing barn, solar-heated poultry barn, and a service building used for laundry, cooking, ice storage and coal storage.  All were built with eighteen-inch-thick sandstone walls and two-foot-wide foundations.

The sandstone outcroppings that rim the hill sides in the area above the river became quarries for the stone cutters, who also included the Byland brothers, the Hedeen brothers, and Richard Salstrom.  During construction, Husman and his family lived at the site.

The LX Bar is located in the northern Powder River Basin of northeast Wyoming, just east of the Campbell-Sheridan county line and just south of the Montana border.  Kendrick believed the county road was going to be put in along the west side of the Powder River. The road does begin on the west side and travels by the K Ranch (today’s PeeGee Ranch) and Kendrick Canal before crossing over to the east side of the river near the junction of the river and Clear Creek.  Unfortunately, the rural electric lines were put in along the road and the LX  Bar was never converted to electricity.

Cattle from Texas trail drives were brought through a corral, dipping station and holding pens before being turned loose on the range. 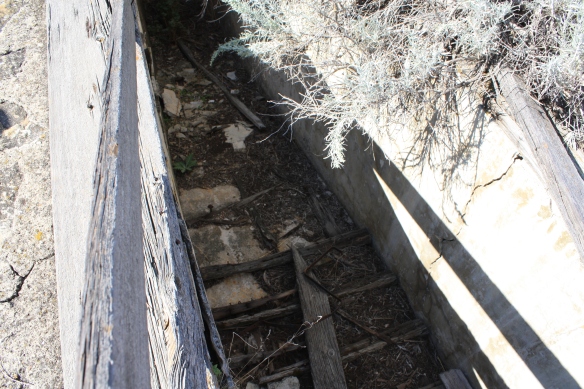 A long concrete chute steps down about 10 feet at the deepest point to immerse the cattle in a potion concocted to kill ticks and other pests.  Cowboys would dunk the cattle’s heads as they came through to be sure they were completely submerged.

This bovine swimming pool extended about 100 feet in length and it must have been quite a feat and a spectacle to immerse several hundred cattle in this manner.  Where was Temple Grandin when you needed her?

Cedar posts were cut from the nearby pine ridge and are still standing strong in this corral at the processing barn 106 years later.

I found this structure to be particularly interesting.  Built into the hillside, it is protected from the Wyoming winds and snow during winter, and remains cool in summer.  The windows face east for maximum sunlight and solar gain.  They are currently boarded up as part of the stabilization effort underway by the Wyoming State Parks and Cultural Resources Department.

The interior of the poultry barn was dark and difficult to photograph, but these birds lived in relative splendor compared with most early day chicken houses.

Funding is not available at this time for a complete restoration of the LX Bar, however since the ranch buildings and 50 acres were acquired this past summer, recent work on the ranch has included mortar replacement, chimney and wall stabilization, roof maintenance, manure removal and the “buttoning up” of various openings. 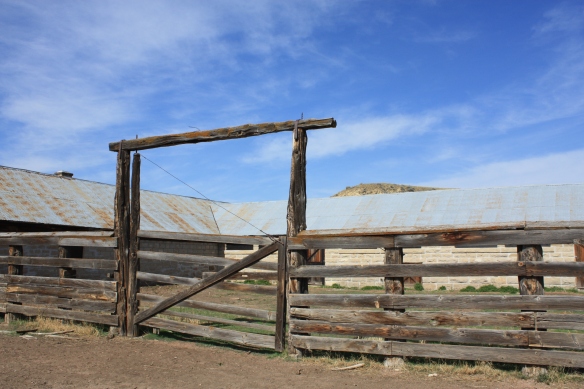 The main barn is immense and encompasses two distinct wings–one running east and west and one running north and south, joined in the center by the horse barn.  The blacksmith shop is in the east end.

Horses were penned in the corral at the main barn or kept in the stable.  These timbers and wood planks seem as rugged and sturdy as the day they were constructed. 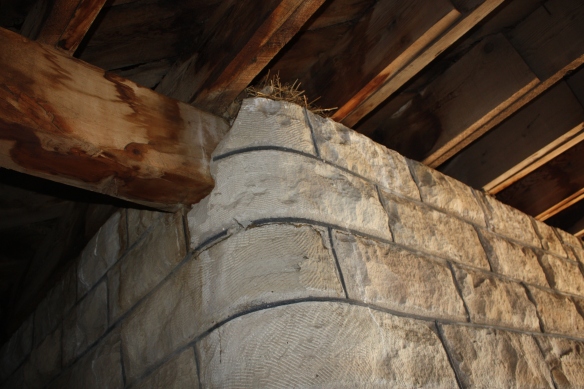 The rounded edges in the horse barn took some effort and precision.  The stonemasons did a fine job of it.  Makes for a nice perch for the birds.

Some of the new roofing materials seem at odds with the natural surroundings of stone and wood.  All of the buildings had tin roofing which had begun to loosen and blow away. Some replacements pieces had to be added, as well as tightening down all the existing tin roofing to prevent water damage.

Saddles, bridles, harnesses and a variety of leather appurtenances were stored in two large rooms.

Cowboys had their own quarters.  One old timer recalls that in winter, the frost would be built up on the stone walls inside and they would be forced to move their bunks in to the center of the room around the stove.  Wyoming winters used to be more severe!

The wash room in the bunkhouse still contains this old ceramic bathtub.  It appears somebody borrowed the plumbing, but since they didn’t have running water, it doesn’t matter.  Water had to be heated on the stove for a Saturday night bath, and likely more than one cowboy made it through one tub of clean water.

The handsome stone columns and porches  on the living quarters made for a very refined structure on the prairie.  The design of these structures must be attributed to the master stonemason Oscar Husman.

The primary kitchen that served the ranch was in the multi-purpose building that comprised the laundry and coal and ice storage.  This old stove could tell some stories about the cooks and meals that were created on its burners.  I doubt they had to resort to cooking shoe leather, however, and could not help but wonder how the shoe was placed on the stove??

In 1910, the same year this ranch headquarters was constructed,  John Kendrick was elected to the Wyoming State Senate.  Four years later, he would become governor of Wyoming.  He was re-elected in 1922 and 1928.  He and his wife Eula built their dream home in Sheridan– Trail End– which was donated by the Sheridan County Historical Society to the State of Wyoming for use as a historic house museum.  Nearly 20,000 visitors annually tour the Trail End.

The Kendrick Cattle Company was in existence until 1988 when family members discontinued operation of the ranch holdings.  In 1992 the ranch became the property of music producer James Guercio, who recently donated the ranch headquarters and some land to the State of Wyoming to be part of the state parks system.  It is the only historical ranch in Wyoming that is now owned by the public.  All the buildings are being stabilized, but the ranch is closed to public access awaiting major renovations and a pedestrian bridge across Powder River. That should be some bridge to stretch across the meandering Powder — a mile wide and an inch deep–too thin to plow, too thick to drink!!