Tutu, our beloved female cat, was gone.  No trace of her anywhere.  We searched all the sheds, enclosures, vehicles and places we thought she might be.  She and her buddy Oscar follow us all day long as we do chores and work on projects outdoors.  She loves to explore, and sneaks into places she shouldn’t be if we are not watchful.  She also has an independent streak that speaks loudly about her intentions–“I’ll go where I please!”

More than the other cats, she likes to find a high-level perch.  That may be because she is the only female among a gang of guys–Oscar, Bleu and Mr. Mouse–who are not always friendly towards her.  Even Oscar, her roommate and playmate since they were tiny kittens, can be rough and rowdy with her and she has to spit and howl and fight back, which she does very well.  Nobody is going to work the herd on her! 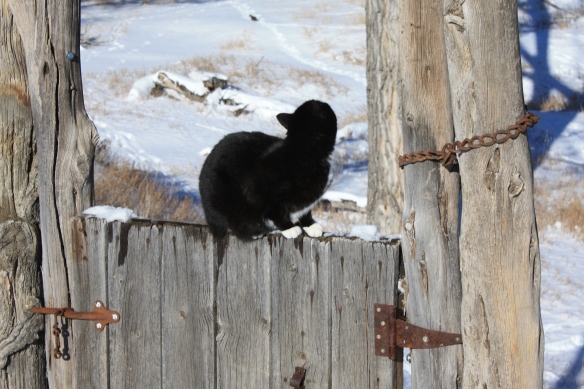 We searched the entire area for her, calling her name and hoping to see her mysterious green eyes and exoitc face come bounding out of her hiding place.  I fed Oscar and laid her can of food aside, awaiting her return.  It grew dark and we gave up the search for the day.  At 4:00 a.m. this morning we were awake and wondering.  What had we missed?  When had we last seen her?  Michael remembered he had set the live trap out by the old garage, and decided he had better check.  There would be no sleeping with that thought lodged in his brain, so he pulled on warm clothes and tromped outside to check the trap.  Nothing.

When I opened the door to the garden shed this morning (their living quarters), Oscar seemed a little bewildered at first, and then overly friendly.  I could tell he missed Tutu and was seeking some reassurance.  I needed some too.  This little cat has a hold on our hearts and we simply did not want to believe something awful had happened to her.  Did a fox take her?  A bobcat or coyote?  There were so many possibilities and none seemed hopeful. 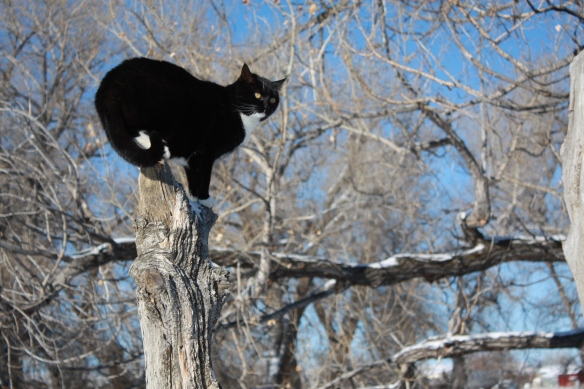 Our morning trip to the barn had a sense of urgency–did we overlook someplace where she may have holed up?  Did she decide a warm haystack and Tilly’s barn were more fun than sharing the garden shed with Oscar?  Would we find her there?  Suddenly Michael remembered he had opened the granary to store some things for me–we had not thought to look there.  Neither of us could recall seeing her nearby when he opened the door and he did not recall her going inside while he was there.  He suggested that I walk over and check the granary.  I tromped through snowdrifts, sagebrush and ice and as I approached the granary, I heard a cat crying out.  I sobbed and pounded on the door, so happy to hear what I knew were  her cries for help.  Michael ran to the barn for a hammer, as the granary door is impossible to open without one.  It seemed like an eternity to me, but finally the door sprung open and out she came, none the worse for wear.

It was hard to shake the “what ifs” as we tried to imagine the outcome if Michael had not thought of the granary.  We rarely open it and it is far enough off the road and our daily walking path that we could not have heard her cries.  We decided Tutu had used up one of her nine lives.  It will be interesting to see what she does with her remaining eight.