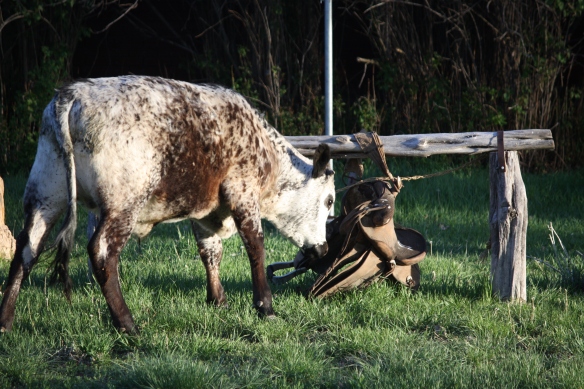 Abe the steer has decided he doesn’t like the ancient saddle we mounted on the hitching post.  The saddle is stiff with age and quite heavy, and Abe has been attacking it, knocking it to the ground, and then continuing to “charge” it with great vigor.  We put it back up and he comes along and knocks it off again.  Only Abe knows for sure why?? 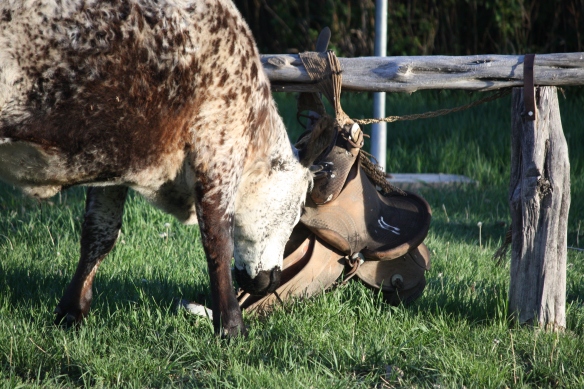 Abe is akin to a five-year old boy with nothing to do.  He makes a regular raid on the goose pen, overturning a heavy, cast-iron feeding tray and eating the cracked corn and scratch grains.  Today he added insult to injury by drinking all the water from their pan, tore open a new bale of straw I was planning to use as mulch on a newly seeded hillside, ate the grain and made a complete nuisance of himself.  We keep a heavy rubber strap enclosure on the gate, leaving it open enough for the geese to come and go.  Abe waltzes right through it.

Since his birth last year in March, Abe has been wandering the property and by now he knows every nook and cranny where he may find a tasty bite, every vulnerable spot in the fences where he might explore new territory, and every watering station along the way.  He likes to drink from the bird bath outside the living room window (even though it holds a scant few cups of water) as well as the wading pool and water bowl we fill for the geese each day. He may choose to drink from the pond, the horse tank and Tilly’s two-way watering station at the corral, but his insatiable curiosity leads him to dip his nose into every other water source along the way.

When he’s feeling frisky, Abe becomes a 600-pound torpedo, bucking and kicking up his heels as he tears off at a dead run down the creek bottom. We keep a wary eye on him as he follows us to the barn each evening for his “cake” and bit of hay. I remember the day he came up behind our old black lab Lady and bumped her backside, and I don’t wish to be the recipient of such kindness.