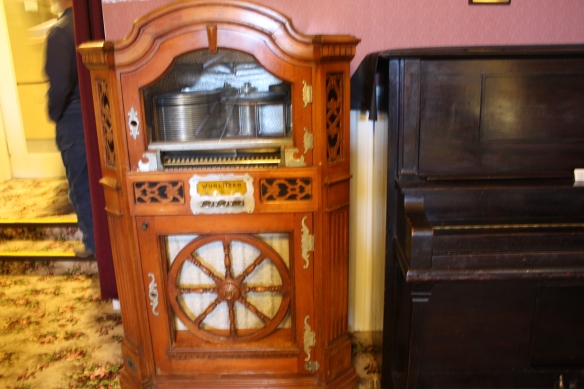 This old Wurlitzer juke box was a standout in a tour of the Pioneer Museum in Douglas, Wyoming recently.  It brought back some memories of an old Wurlitzer that stood in my grandfather’s general store in Kaycee.  The juke box I recall had curved glass neon-filled tubes that changed rainbow colors as the 78 rpm records spun out country tunes from the stars of the 1950’s (Hank Williams, Ernest Tubbs, Homer and Jethro, Jim Reeves, Eddy Arnold, Chet Atkins, Patsy Cline, Carter Family and Tennessee Ernie Ford, to name a few).

It took a nickel in those days to buy a song.  I begged for quarters to pick five tunes, and some evenings after closing, my grandfather would take out a huge ring of keys that he kept in his pocket, open the door and push a little lever that allowed us to select a few with no coins.  One of my favorites was Old Kawliga, a sad tale about a cigar store wooden Indian.  I still know most of the words!

I don’t know what happened to the old Wurlitzer, which was sold along with the general store when my grandfather retired in the 1960’s.  But I have my memories of being a little kid with face pressed to the glass, watching the records spin and being enchanted by the changing colors and sound of music.

The joys of spring are within grasp, albeit tenuously, and are manifested in part by balmy weather in the 50’s.  We were inspired to build a fire in the cast iron outdoor stove, drag down a couple ancient metal lawn chairs, and pop the cork on a lovely Tempranillo. Rib eye steaks to follow!

Flames rise above the chimney and a few sparks fly out, like lightning bugs in the twilight.  We do not have lightning bugs in Wyoming, but have experienced them in other places.  I used to help my children capture them in jars in Ohio on summer evenings.  But I digress.

These sweet little Johnny Jump-ups have seeded all over the yard and have begun to sneak up in crevasses in the rock garden.  They don’t seem to mind the snow and cold of the past few weeks and keep persevering to bring us a little cheer. 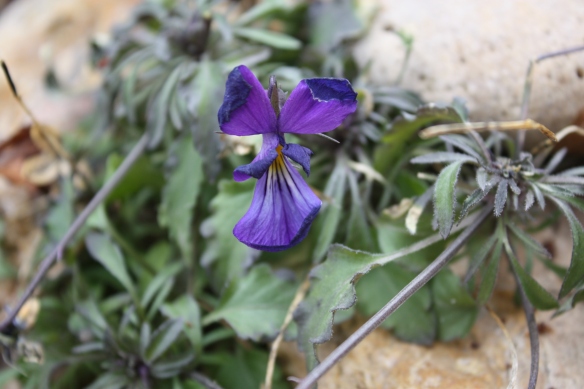 Not to be outdone, the violas have begun to bloom along the dry creek bed.  In a month the banks will be covered with these delicate little flowers who make their early arrival so special.

The ice is loosening its grip on the pond, with open waters around the edges.  Rosie likes ice in her drinks!  The logs where we launch to ice skate are right at water’s edge this spring which is a good indicator of the water level.  By August they will be high and dry!

There are additional voices to add to this harmonious ode to spring that could more likely be categorized as the “Ides” of March.  The barnyard is filled with strident voices, cage fights, pit battles and overall chaos.

Mr. Mouse and Ruby have been seen streaking around the yard in hot pursuit of one another.  Poor Mr. Mouse is ancient and Ruby is no spring chick.  Whatever set them off to do battle with one another is a mystery. The chickens have spent the winter in the Big House and when I opened the door to let them out to enjoy a little spring weather, they went nuts.  Maybe Ruby just wanted to vent a little spleen. Maybe she mistook Mr. Mouse for Oscar the grey-striped kitten who resides at night in the Big House and has been observed teasing and raising some dust among the hens.  Only Ruby and Mr. Mouse know for sure.

Evening chores a couple nights ago were about enough to put me away.  The fun began with frantic calls from Fred, one of three Chinese brown geese that remain on the farmstead.  Poor Fred has been ostracized by his handsome son, Ricky and hangs around the lunatic fringe of the goose kingdom.  (Fred and his former mate Ethel hatched four babies a few years ago, and Ricky is the remaining heir to the throne).  Ricky is very covetous of Ethel and lately has begun pounding poor old Fred into the ground with vicious attacks. On this particular evening, Fred had tried to escape through the fence into a pen where Cromwell the rooster and Miss Betty White, his companion reside.  He got hung up in a partition of plastic mesh that lines the stock panel and was wedged tight, with his head out one opening in the stock panel and one leg out another.  I had to open the gate, releasing Cromwell and Betty White into the goose pen while I attempted to drag Fred out of the sandwich made of stock panel and plastic mesh without tearing off his head or limbs. 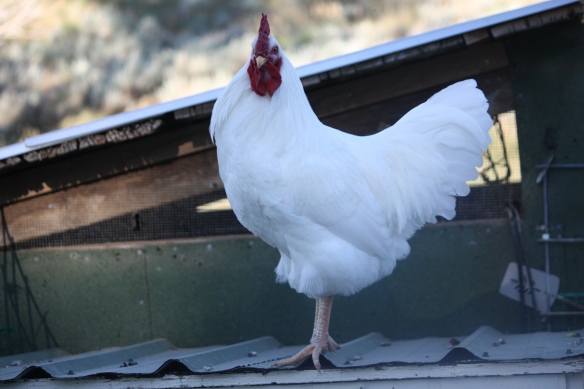 I needed a knife to break the plastic that surrounded Fred, and hollered for a guy I know who always has a knife on him!  As he approached, Cromwell got into the game.  Cromwell apparently doesn’t like anyone but the one who feeds him each day (me) and began to attack Michael.  The cacophony that erupted was amazing.  Betty White was frantically flapping her wings and clucking; Ricky and Ethel were honking and racing up and down; Fred, who was still captive, was screeching in panic and pain; Cromwell had gone from a placid silky rooster into a spiky looking warrior with feathers sticking out like porcupine quills as he attacked Michael, who was attempting to hold him off with a water bucket and a stick.  Rosie  was in a frenzy, barking and circling the whole melee in an attempt to chase whatever creature tried to break loose.  But I digress.

We barely had time to recover from Fred’s rescue, when Pearl disappeared.  As the hens were locked up in the Big House for the night, I noticed Pearl was not among them.  She is the most independent, hard-headed little hen and when the rest are indoors for the evening, she still wanders about, seemingly without a care for time or place.  I had given up trying to find her and went on about my chores.  As I rounded up Cromwell and Betty White to put them into the old brooder house where they roost at night, guess who I found?  Pearl.  She likes the brooder house and tried on several occasions last fall to return, only to be relocated back to the Big House where she has spent the winter with the other hens.  When Cromwell sighted Pearl, he went berserk and attacked her.  She was cowering along the back wall beneath a roost with Cromwell on her back.  I grabbed a stick and tried to push him off but his claws were buried in her feathers and he was pecking her head so fiercely I thought he would kill her.  After several more misplaced whacks with my stick I banged my head on the roost and got into the game madder than the proverbial “wet hen!”  I went after Cromwell with my stick so fiercely he ran out of the brooder house, allowing me to catch Pearl and beat a hasty retreat. Later in the evening, I was anxious to see if Pearl had survived her ordeal.  She was a little subdued and promised to behave.  That remains to be seen.  Tomorrow will be another day.

After the long cold winter, we are anxious for spring and are hopeful that our wild and domestic critters will settle down into a routine, of sorts.