A little dog came into my life one winter day, and soon came to be my best friend, protector, and daily shadow.  She was fearsome, and stood her ground when a vet-tech brought her into my home in Laramie.  She was wet from a bath and it was February.  I remember going for a towel to dry her and gave her a good rub to reduce her shivering. A friend’s big dog (about 10 times her size as a 4-month-old puppy) tried to offer a friendly sniff and she bristled and barked, approaching the much larger dog in an aggressive stance that said, “don’t mess with me!”  I had no need of a dog and tried to convince the kindly vet-tech that, although this little dog desperately needed a home, I was much too busy to get involved with owning a dog.

Sooooo, ten years later I am left with trying to figure out how to fill the hole left in my life by the loss of this little dog, who I named Rosie (my mother’s nickname) and came to love dearly.  She died after a four-day struggle with what we can only surmise was due to ingesting something poisonous or toxic.  We are still puzzling over what it could be–a dead animal carcass?  The vet said that can cause botulism but Rosie’s symptoms would have been more severe immediately.  Rat poison?  Again, the vet said they ran a test that ruled out that as a cause.  Fertilizer?  We have none on the premises, having used all we purchased last fall on the lawn.  Our garden fertilizer is kept in a secure place.  A dispenser with Round-up was sitting on the porch where I left it recently, but would have required Rosie to open the handle, depress the pump and drink out of the hose.  Not likely she would have been attracted to the taste or smell even if she could have managed to drink it. 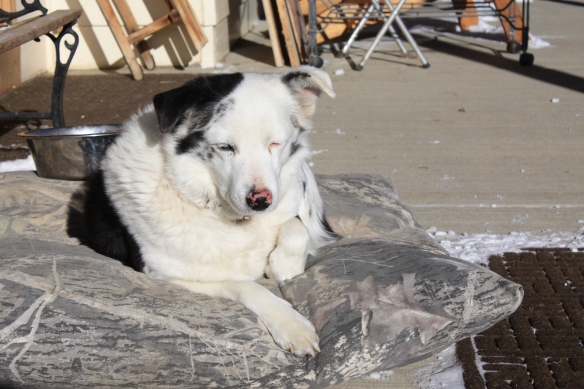 We were on the way home from a trip to Colorado when we got a call from Joyce, our caregiver.  She was alarmed that Rosie was nowhere to be found as she was doing evening chores.  A little dog who for 10 years has always been at the gate or nearby, waiting for the people who matter to her to return, had disappeared.  When we arrived home it was growing dark but we began the search with flashlights.  We called her name, whistled and poked into all the sheds and likely places for her, to no avail.  By 10:00 p.m. we gave up and went to bed.  I did not sleep but tried to imagine why Rosie would have vanished.  And shed a lot of tears. 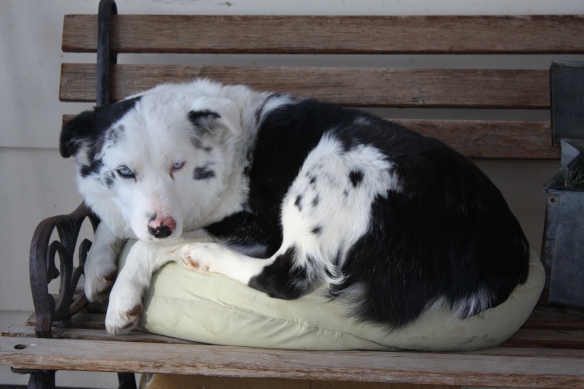 “They could make these cat beds a little bigger!”

We put a photo of her in the post office and hoped if she had decided to leave home to find us, someone would have seen her along the highway.  We knew something was really wrong with her, because there were dark ominous stains on her sleeping pad out on the porch and her nighttime perch on our sofa was stained.  Rosie must have been mortified, because she has never in her entire life left a mess in the house. Later that morning Michael was coming from dropping off a salt block at the pond, and saw a white blob near a neighbor’s cattle guard.  He drove closer and found Rosie, still alive but barely.  When I saw him walking up the road toward our house with her in his arms I thought she was dead.  When I called to her,  she lifted her head.  We wrapped her in a blanket and raced to the vet clinic in Kaycee with her, knowing there wasn’t much time.

Rosie never left our side.  Our daily travels are as varied and taxing as can be imagined but Rosie was not to be left behind.  She would snarl at Ricky, our goose if he became too aggressive when I penned them at night; she flew at Cromwell, our rooster when he decided to get too frisky as I was placing feed in his pan; she nipped at Michael and the entire universe of visitors if they came too close to me, which could be exasperating.  We tried a variety of things to reduce her insistence on protecting me, fearing she would eventually bite someone and we’d be in real trouble.  Nothing would deter her.  Michael fed her daily, warming her food and trying to win her over.  After nearly eight years, it didn’t make any difference.  She loved him too, but not enough to alter her fierce protection of me.

Competition for attention was foremost in Rosie’s mind.  If our cats Bleu, Oscar, TuTu or Mr. Mouse came around for a rub or a scratch, Rosie could not tolerate it.  Consequently, the cats migrated to Michael’s lap, leaving me off limits and bereft if Rosie was around. When I worked with Tilly, our horse, Rosie was vigilant and would try to sneak in a nip at her tail, which would get her a scolding and banishment from the barn.  She would wait patiently in a shady spot nearby, watching and waiting for me to finish.  To understand her psychosis, one must merely know that she is half Border Collie and half Australian Shepherd.  She looks more Aussie, but her obsessive compulsive personality is pure Border Collie.  She loves to herd the guineas and chickens and while her methods are not always successful, her failures can largely be attributed to her mistress who has done a lousy job of training her!

X-rays determined Rosie had no broken bones or bruising, nor obstructions from a bone in her digestive tract.  She had suffered from severe diarrhea which had evolved into a yellow fluid leaking from her behind which she seemed unable to control. She was severely dehydrated.  She could stand for a short period, but could not walk. Diagnosis was inconclusive.   We were referred to a clinic in Sheridan, 84 miles north.  As we neared town, Rosie seemed to rally a bit.  She moved around on her pad into a new position and when I looked back at her, she was trying to sit up, panting and grinning like she always does when she gets to go with us for a ride.  High on her list of favorite things to do was go for a ride and her only regular opportunity was a monthly trip to the landfill in Brownie, our old trash truck.  Now here she was, getting a real long ride! 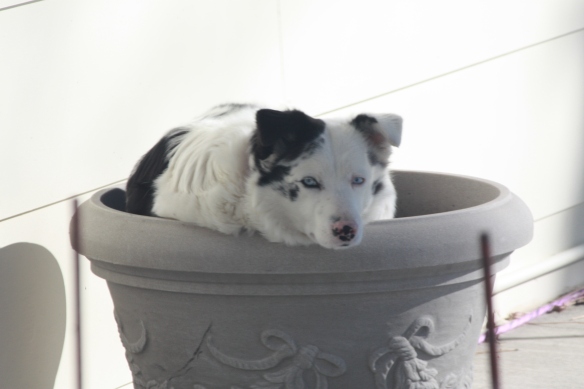 We answered a battery of questions regarding Rosie’s environment as they prepared to do more X-rays, ultrasound and get her on fluids and antibiotics. We left her believing she would perk up and overcome whatever illness she was suffering from.  A lengthy message from the vet when we returned home confirmed all the ongoing tests and efforts being made in her behalf throughout the day since we had departed. We were to pick her up in two days since we had dental appointments in Sheridan and we were confident that she would recover. The next morning we had another message from the vet with a lengthy update and a request that we call her.  The update was not encouraging and I began to fall apart again. After a thorough discussion with the vet, we concluded we should return to Sheridan right away and bring Rosie home.  We would care for her over the weekend and have her euthanized at home.

The only diagnosis the vet could come up with was a wild card and quite rare–dysautonomia–a condition currently under study at the Wyoming State Veterinary Lab.  Some, but not all of Rosie’s symptoms seemed similar.  It typically appears in dogs age three or younger; living in rural areas; spend half time outdoors; and it is prevalent in Kansas, Missouri, and some reports in Oklahoma.  The vet had arrived at no conclusions on this diagnosis. She was not optimistic they could do more for her, however.  Rosie’s vital signs were all pointing in the wrong direction.  She offered to euthanize but we declined, deciding to bring Rosie home and say our goodbyes.  We picked up some supplies for her care and when we arrived at the Sheridan clinic, we were ushered into the waiting room while they prepped Rosie to go home.  After what seemed an interminable amount of time, the vet came to us with the bad news that Rosie had just died, probably just a few moments before we arrived.  Her IV pump had stopped and they did not notice right away.  We were devastated.  I only wanted to hold her once more and tell her how much I loved her.  I was too late. 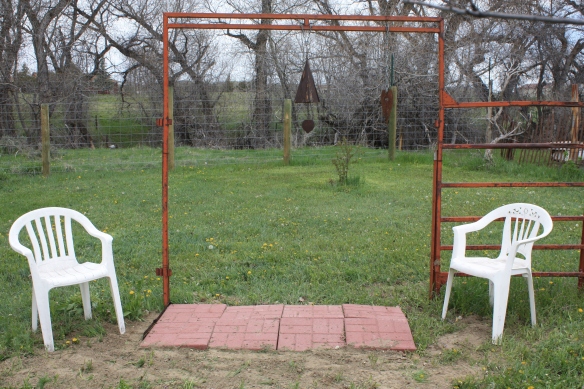 We buried her wrapped in a shroud in a white cardboard coffin furnished by the vet, with a few mementos tucked inside.  The fruit trees and flowering shrubs are just beginning to bloom, and the Maine bell hanging above her chimes softly in the breeze.  I will plant a climbing rose bush in the hope it will cling to the rustic metal stock panel we erected in the orchard as yard art.  It will be a place we visit often. 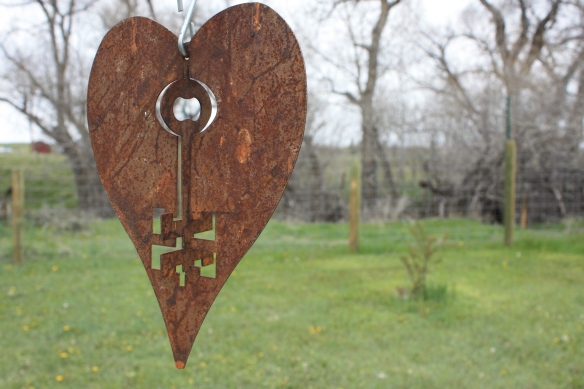