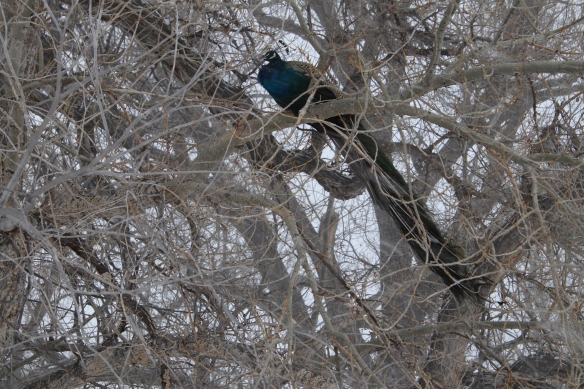 A male peacock which belongs to a neighbor is perched up in the cottonwood tree and on this particular day, we are having a winter storm complete with wind, drifting snow and all around misery for our feathered friends.  I was headed to the barn to care for Tilly, our mare and Feed Lot, our Long Horn steer when I got a tug from Maud’s leash.

At 50+ pounds, when Maud decides on a direction she is hard to resist.  More often than not, she drags me along or worse yet, pulls me off my feet in a mad dash for a deer, rabbit or some other imagined chase.  On this day, she sighted the peacock up in the tree and wanted to investigate. We have been watching and caring for the peacock for about a month in the hopes he will head home on his own volition.  He evades capture so we are left with few options.  It seemed odd he would be up high in a tree in a storm.  A feeding bowl at the base of the tree had blown full of drifting snow.  I planned to check on it when I came back from the barn, but with Maud’s insistence, decided to dig it out and re-fill it in case a frozen bird needed a bite of sustenance and could not wait. 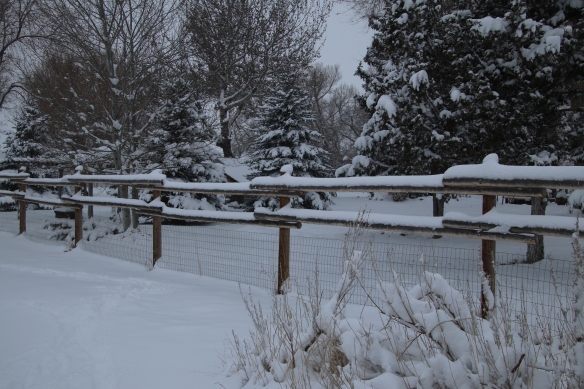 We walked back to the garden shed where the bird feed is kept, filled a small bucket with seed for the peacock, and before I could open the gate to leave , there was another tug on the leash.  Since we were still in the yard, I let go to see what Maud was so interested in.  She raced to the fence nearest the chicken house and barked ferociously.  The snow was blowing and swirling so hard I would have overlooked two of my favorite Welsummer chickens huddled and half frozen by the chicken house door.  These hens wander up and down the creek bottom foraging until the other chickens have gone in for the day.  I had overlooked them and locked up leaving them out in the storm all night.  Poor girls, I had to pick them up and carry them inside to warm up. 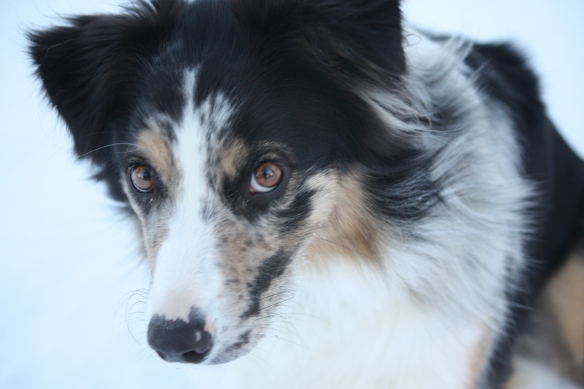 Meanwhile, there is still a very hungry peacock perched high up in a cottonwood with the wind and snow swirling around him.  I dumped the bucket of seed in the bowl where I have been feeding him and kicked the snow back in the hope it would not drift over before the peacock decided to come down and have a bite.  I have been feeding him at two locations, but the snow is badly drifted up along the grove of Russian Olive trees that he travels back and forth between.  I doubt he’ll be doing much travel today and my worry is that he will suffer frostbite if he doesn’t come down soon.

Day II – Minus 3 degrees last night, storm and winds died down and today it is sunny.  Pete the peacock is still in the tree where we believe he has been ensconced for about 36 hours now.  He is still alive, perhaps he can no longer fly down?  I expected to see a frozen, dead bird on the ground this morning, but he is still hanging on.

An update is in order.  Pete’s travails are no less than temperatures that have dipped to -21 degrees, combined with several additional snow storms, and he is still managing to stay alive.  Taken Feb. 22, this photo captured him near one of his feeding stations at the base of some Russian Olive trees.  We were traveling for several days and wondered how he would manage without his daily rations.  Fortunately for Pete, our animal caregiver took pity on him and dumped some wild bird seed for him. 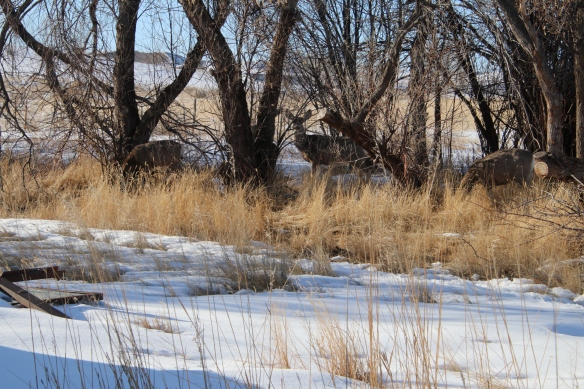 As if Pete didn’t have enough trouble, a herd of deer that hang around all winter have discovered his feeding bowl and scooped up most of the cracked corn and sunflower seeds, leaving Pete with the crumbs.  What is a guy to do?