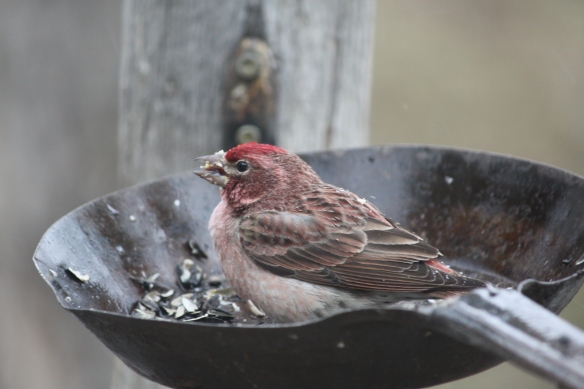 The birds have been flocking to the feeders in the bitter cold weather this holiday season.  We are enjoying more snow that in recent years and had a lovely white Christmas, shared with our many friends here along Dry Creek.

Old Hoot is back in his favorite perch in the cottonwood above the house.  He blends in so well he is almost invisible. 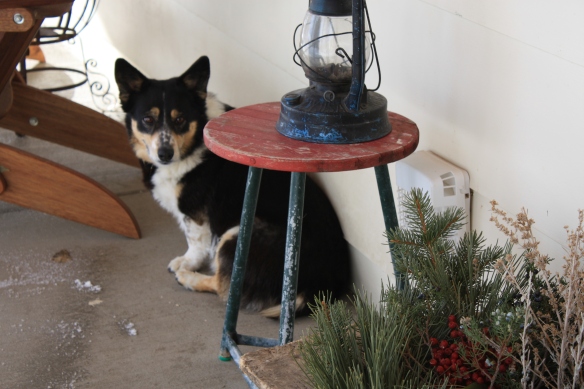 Sally Mae had not dropped by in quite some time, and on Christmas Eve appeared coming down the lane to the house for her usual cookie.  Many hugs and kisses and tummy rubs for Sally made Rosie quite jealous and she protested vigorously.  In this scene Sally is trying to make herself a little more inconspicuous as she basks in our love and affection for her. 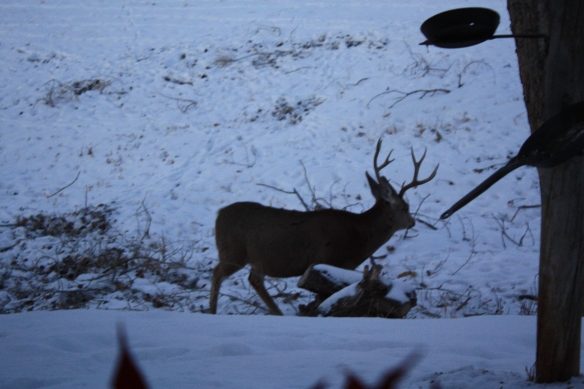 This guy was captured Christmas Morning through the bay window.  He brought along a pal.

These guys don’t look like reindeer, so I doubt they were up all night delivering presents.

Bleu was basking in the warm glow from the fireplace – “What, me worry?”

Bleu was chastised and chased from Rosie’s sleeping pad, so he chose his next best option and curled up in a chair.

Well, I sure taught that cat a lesson.  Some crust! 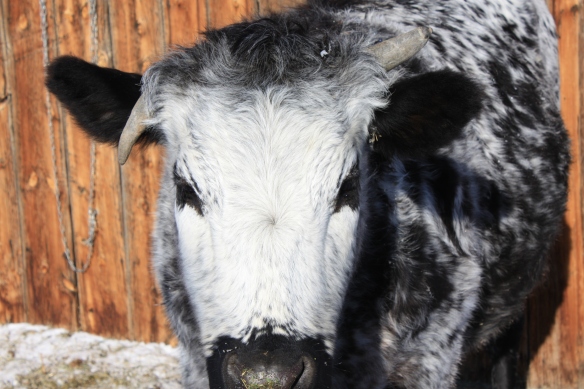 Best buddies, Tillie and Feed Lot (Abe) spend their days together grazing and romping the length and breadth of the place.  We bring them in late afternoon and Tillie spends the night in a soft bed of wood chips inside the barn, while Feed Lot fends for himself outside the corral.  He’s hoping next year Santa brings him a shed to keep the snow off his back and the wind from his face.

Mr. Mouse is top hand in the barn.  He spends his days hunting for mice and voles but heads to the house evenings for his vittles. He has planted himself at the gate to let everyone know he’s ready to have his supper and a warm bed.

This shot is dedicated to Esme’ who built a nest and laid her eggs somewhere in the poplar patch last summer.  We knew she was nesting and saw her on occasion, and then her visitations to the wading pool stopped.  We searched in vain for some sign of her, but not a feather or a trace was found.  So now Fred, Ethel, Ricky, Lucy and McGill have to carry on without her.

Since the chickens took over what was goose quarters last winter, the downy feathered five have had to survive in a makeshift home of hay bales staggered to offer some nooks and crannies. 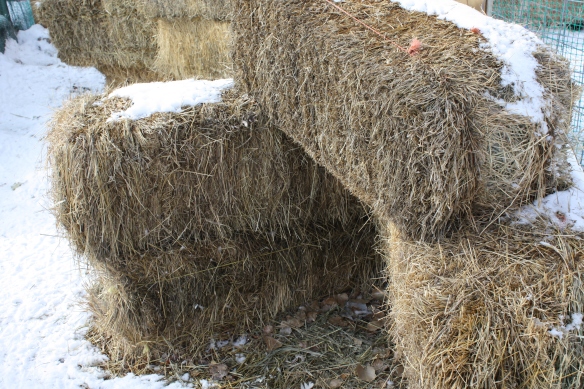 The chickens have fared very well in the ancient brooder house Dad built in the 1940’s of 4 x 4 lumber.  They lay more eggs than we can keep up with, producing 70-80 per week, even in cold weather!

The little fluffy tops had to have a separate house, as the larger hens were picking on them.  Lady’s old dog house, which was well insulated, was converted into the “Polish Condo” and makes a snug little house for Phyllis and Marilyn.  They have their own separate yard to scratch and exercise in right next door to the other chickens.  Pearl flies over the fence that separates them to visit most days, but she doesn’t harm her two little friends. 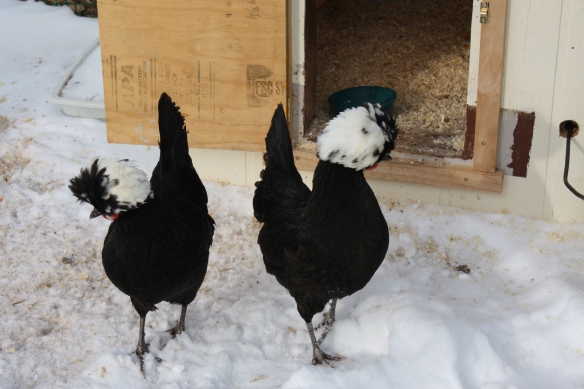 “We could do with some warmer weather, and how about this new health insurance?” . . . .

We were’t able to capture everyone, and there will doubtless be additions to our menagerie in the coming year.  For now, we wish everyone a Happy New Year in 2014!

The ongoing drought during the summer and autumn of 2013 resulted in little grass, but a bumper crop of weeds–tumbleweeds to be sure!  The winter winds have stirred them and set them to tumbling along the roadways and fields, bumping up against fences and just about anything else that gets in their way.

Frosty the Tumbleweed Man arrived just in time for the holidays and greeted guests for the winter solstice open house.  What a guy!