Abe, a.k.a Feed Lot, is caught in the goose pen, terrorizing them and tearing up three old bales of hay (and I mean OLD)!  He jumped over the fence day before yesterday and we had to open the gate to let him out, with a proper scolding, of course. Can you picture a 2000 pound steer jumping over a four-foot stock panel?  Yesterday, he pushed his weight against the stock panel that serves as the gate, and the rubber straps that held it in place gave way.  More mess, more hay scattered around.  The hay bales were placed in the pen to block the wind and snow in winter and to provide a little shade in summer.  They have become permanent fixtures, until now. 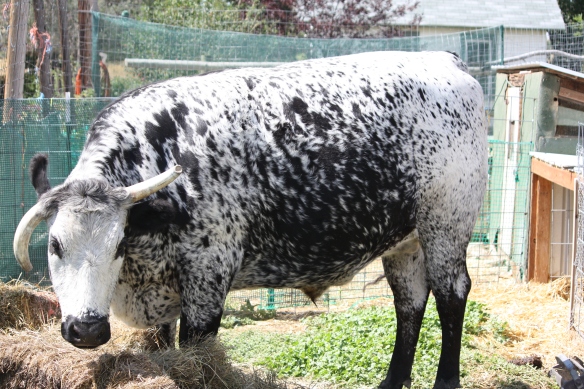 Caught, he knows he isn’t supposed to be there.  Why is he in there?  The hay, as described, is ancient and unappetizing, even to an overweight steer.  He has to jump the fence or force his way through the gate–even though he has acres of good grass to eat–for a few bites of dried out, lousy hay.  So why does he go there?  Because he can.

Aha!   Abe has an accomplice.  Today,  after pushing through the gate, Tilly followed him into the goose pen to join in the fun.  She wasn’t interested in the hay, obviously deciding it didn’t meet her high standards, but she hangs out with Abe and was curious to see what all the excitement was about. 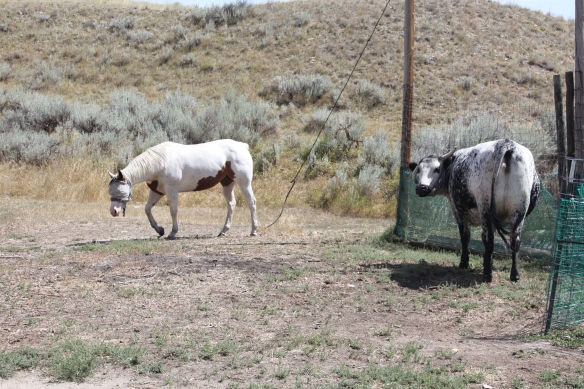 After this pair of bandidos struck, we determined something serious would have to be done.  The goose pen is in shambles and they will have to take up temporary quarters elsewhere for the night.  Since Abe is the perpetrator in all this wrong-doing, he is going to feel the sting of the sling shot once again and he knows full well it is punishment for something he shouldn’t do.  His tough old hide has bounced off more than one steel pellet.  They don’t injure him, but they sting like hell.  As for Tilly, well . . . . . . . . . . .she appears to be looking for mercy. 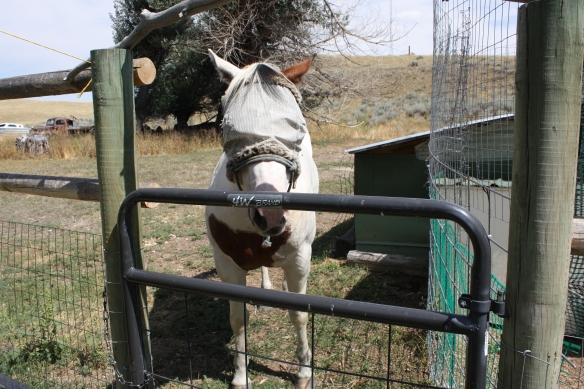 I took pity on her (surprise!) and fed her a carrot if she promised never to follow Feed Lot into the goose pen again.  Yeh, right.  Today we begin to clean up the mess and re-build a safe enclosure for the geese to spend their nights.  But first, we have to deal with Abe’s standard calling card. 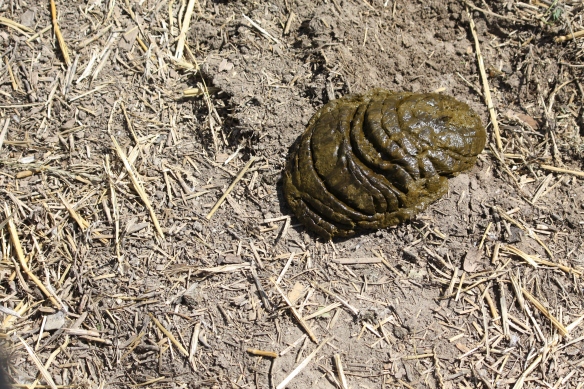 Life on the funny farm.

Two guinea moms who have been tag team partners in building a nest, laying their eggs, and now hovering over their newly hatched keets, have had a long slog.  They arrived in the yard one evening three weeks ago with what can only be described as “a mess o’keets!”  A brown mass of twenty-some tiny guineas, barely bigger than bumblebees, was flowing through the “forest” of grass near the garden shed.  All were striving valiantly to keep up with the two guinea moms leading the parade, their little stick legs pumping hard and heads bobbing just above the overgrown grass which had not been cut in a week.

Our consternation at the sheer volume of babies was heightened by the knowledge we had no control over the situation.  Previous attempts to capture the keets and raise them in the brooder house have met with mixed results.  The guinea hens wanted desperately to escape the confines of the brooder house and had to be turned loose, sans babies. We raised healthy birds, but their knowledge for survival and ability to assimilate with the older guineas was inhibited.  Not to mention, trying to catch the little devils is about as easy as trying to catch a baby pronghorn–they are born to run!  Vivid memories of thrashing around on the ground with a fishing net or plastic tub to capture and get my hands on the little critters overtook my impulse to “save” them once again.

We created watering stations in a couple of locations where the group entered and exited the yard each day, and left a feeder with chick starter granules thinking the little ones would soon starve without something to eat.  We observed they seemed to be eating what the adults ate– insects, spilled seed from the bird feeders, and smaller pieces of scratch grains that we throw to the adult birds.  Each day we attempted to get an accurate count and it appeared the group was experiencing some attrition.  Each evening the guinea moms would depart for the sagebrush and tall grass outside the boundaries of the yard, taking the little ones with them for the night.  They seemed to vary the destination, but we never knew for certain where they spent the night.  The rest of the adult guineas roost in a grove of spruce trees inside the yard where they are relatively safe. 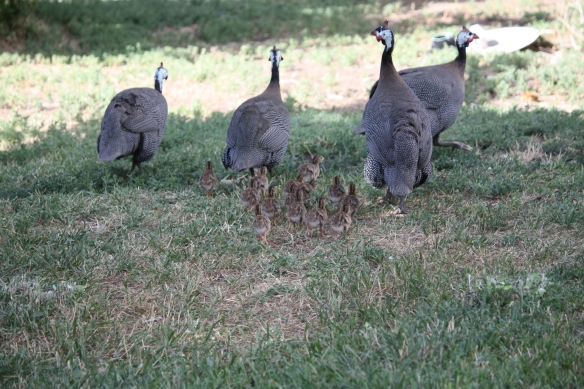 The morning this photograph was taken was somewhat depressing.  Rosie, our dog had barked incessantly through the night, and several times the guineas roosting in the spruce grove erupted in frantic chatter.  I went out with a flashlight but could not detect what was causing the ruckus.  Rosie didn’t offer up any useful information, so I went back to bed. Next morning the baby guinea population had been reduced by half.  We could do nothing but wring our hands and worry each evening when the little troop traveled into the brush. Predators of all kinds awaited them and have decimated the keets to just two remaining. 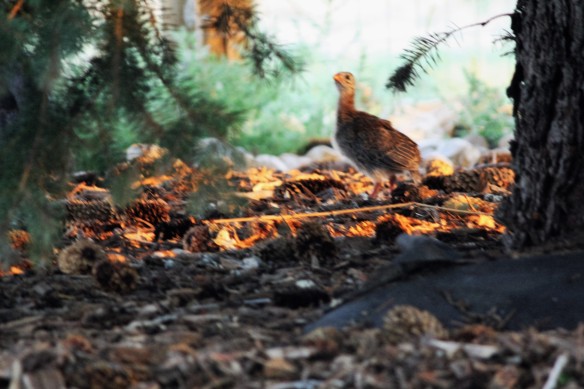 Last evening we were enjoying a fire outdoors on the patio and noticed the guineas were behaving differently.  They were circling a giant spruce where they roost in the winter months as it affords more protection from the snow and cold.  The two remaining keets were attempting to jump onto the low hanging branches of the tree.  Round and round they went, leaping and falling and trying again.  They now have just enough wing feathers to give them loft and tiny as they are, they finally succeeded in reaching a low branch that allowed them to ascend the tree to higher elevation.

As we watched in amazement, we wondered what prompted the decision to change their routine.  Had the keets somehow demonstrated their ability to climb a tree?  Did the guinea hens know they were ready?  Were they desperate to save the last two keets from harm?  The group collectively seemed to know it was time and moved en masse to the giant spruce, circling patiently as the little ones tried their luck at roosting for the first time.

There was no chatter from the giant spruce tree last night.  I worried that the little keets would fall out of the tree and tried to imagine how their tiny feet could grasp a branch all night and stay aloft.  At dawn, I heard them down on the lawn and went to the window to see if I could find the little ones.  They were grazing in the grass with the rest, hopping and strutting along as they embraced a new day.  Their trials and tribulations are not yet over and as the flock departs for the day, they will have to cover the same ground that stretches for over a mile of sagebrush prairie and tall grasses in the creek bottom, catching grasshoppers and whatever else they can find for a meal on the move.  Hopefully they will all return this evening to roost safely for the night. 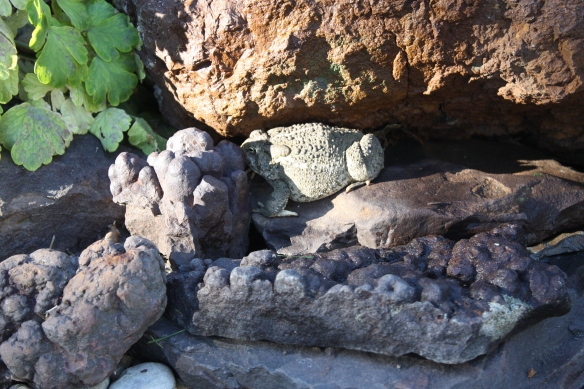 Disguised in a bumpy exterior, Ted tries to hide from notice and blend in with the rocks surrounding his favorite water hole.  His ubiquitous presence in the flower beds, rock gardens and even on the front porch became so common we took him for granted and had lengthy conversations with him as we watered, weeded and wandered around the yard.

A bed of pine cones resting between two huge Ponderosa pine trees seems an unlikely spot for Ted, but he is full of surprises.  I never know when I will rest my hand on the ground while pulling weeds and he will suddenly hop into the air near my finger tips, startling me and eliciting a loud yell of surprise.

Ted loves a bath in the old rock, but he likes his water a bit more temperate.  Not realizing he was lurking in the corner, I filled the rock with cold, fresh water.  The look he gave me says a lot. 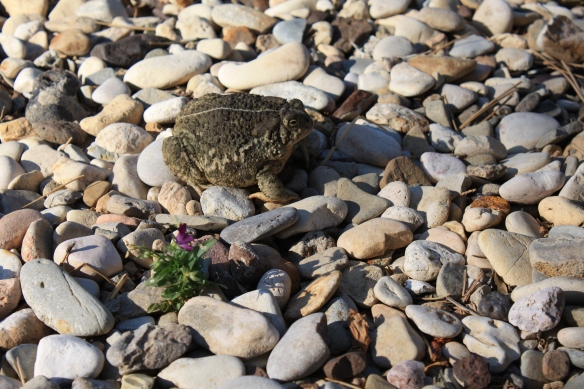 Ted appears to have gained some weight – he looks much larger splayed out on the rocks in the early morning sun.  We decided he is just expanding to catch more sunlight.  I don’t know what the reaction will be if he suddenly decides to hatch a bunch of little Teds.  A trove of toads? 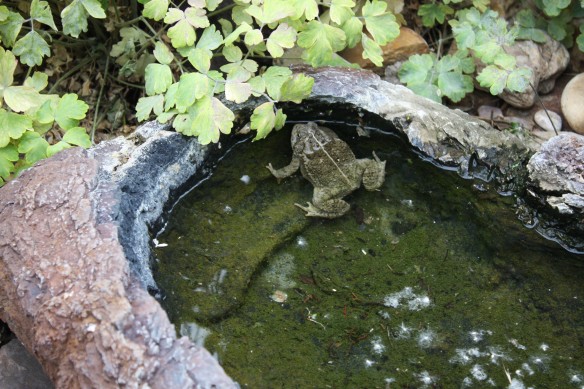 I shall miss my Ted talks when he leaves us for the annual hibernation.  A guy with this much personality leaves a void, you know?