A colorful chapter of ranch history resides in a 100 foot communications tower (give or take a few feet) with about a 20 foot antennae that stands on top of the hill overlooking headquarters on Dry Creek.  In the late 1950’s or early 1960’s Dad erected a tower right alongside the ranch house to support a two-way radio system.  Acquisition of a ranch 20 miles east made it necessary to communicate with hired hands and there was no telephone service.  Phones were installed in pickups with a base station in the ranch house.  The stub of the tower is still planted in the ground right outside a large living room window and is a humorous (to some family members) reminder of an unfortunate (or humorous) INCIDENT.

Brother James was home from college working on a dry farming project just west of the house and as he drove the tractor up the creek bottom, snagged a guy line that was a critical support of the tower.  At the time Dad was having an afternoon siesta on the sofa which sat indoors alongside the living room window.  The tower collapsed on the roof of the house right outside the window.  The scene that unfolded would have been something like this: Dad would leap into the air; dash outside to investigate; let loose with a stream of profanity that would turn the air blue; and discover a collapsed radio tower draped over the house and an unattended tractor sitting down in the creek bed.  The tractor driver (brother James) was long gone, knowing it was better to stay away for a few hours until Dad had worn himself out and cooled off.  Amazingly, damage to the roof of the house was not too serious!

An insurance settlement and a summer pasture lease negotiated in the mid 1960’s would require yet another tower and radio system.  The new tower was erected, this time far enough away from the house that no one could possibly snag a guy wire.  If the new tower fell for any reason  (wind, lightning etc.), it was far enough from any of the ranch buildings that it could not do any damage.  Communications with the mountain camp 65 miles southwest in the Big Horns was successfully launched. 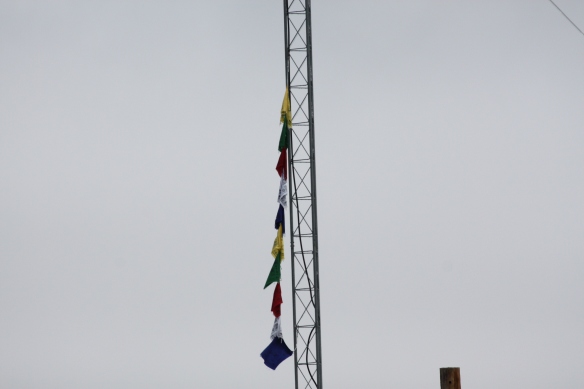 Brother James gathered up the salvage of the old tower and transacted a deal to trade the sections that were not bent to a local rancher for a mammoth antique cast iron stove which he installed in Dad’s new shop.  It’s big enough to power a steamship or locomotive when loaded with wood or coal and heats the whole place.  Dad was quite happy.  Eventually analog cell phones took the place of  radio technology and the tower has stood useless except to hang our prayer flags which indicate which direction and how hard the wind is blowing.

By coincidence, I was in the basement reorganizing jars of last year’s canned goods to make room for the current crop when I heard a “scritch-scratch” noise coming from the window well.  It was very difficult to see what was making such a commotion through 100-year-old window panes so stained you cannot see through the glass.   I could observe movement and a shadow running back and forth, but could not see what creature might be in such a frenzy.

I assumed we might have an eager pack rat trying to dig his way into the basement. We have had these pesky visitors before.  They make a terrific mess and their downright thievery of a variety of small objects which they tuck into their nests is a nuisance.  Dad had a solution and would go for his pistol.  Sometimes it took several loud, booming shots before he would emerge victorious with a dead packrat.  There are still bullet holes in the basement walls.

I went outside to get a closer look and there was a fat, furry little brown creature with a long tail scuttling around frantically trying to climb out of the window well.  It was too big to be a packrat, and I didn’t want to deal with it.   I called for help. 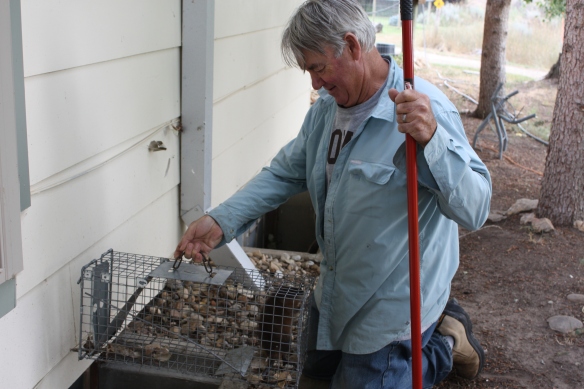 Michael brought the live trap and after some maneuvering, was able to capture what was clearly a muskrat.  But muskrats are water creatures.  What was it doing so far from the pond, half a mile away?

There was only one solution.  Take it to the pond and hope that is where it lives.  If not, it will perhaps find a new home more appropriate than a concrete window well.

Little Musky is home at last, and we hope he or she decides to stay put.  We can only wonder what led it to our window well.  Lover’s quarrel?  Doing lunch?  Checking out the real estate?  Only Musky knows.