A clear sign of global warming, we just had our first frost August 22nd,  at least 2-3 weeks early!  I awoke early in the a.m. cold and grabbed a wool shawl, muttering to nobody in particular (Michael is at the cabin for a few days) that it certainly seemed cold in the house.  Bleu, the house cat, seemed to agree as he was snugged up next to me in the shawl.  A glance at the thermometer revealed 31 degrees. 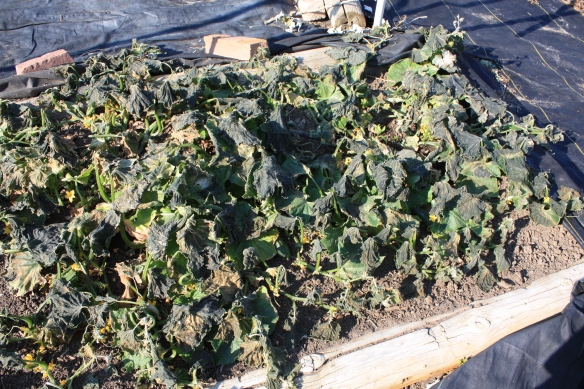 A hasty trip to the garden was enough to make this gardener grouchy.  Fortunately, I had picked a great deal the night before this disaster and had I any warning of frost, would have done much more.  The vines are toast, but the cucumbers, green beans and summer squash were not harmed, thank goodness!

The question mark is how will the tomatoes fare?  The vines were about 50% destroyed and I am hoping enough of the vines close to the ground remain to see them through to ripening.  The kale, beets and carrots will be even better after frost, and the lettuce didn’t seem to be affected.  I guess we should be thankful we didn’t lose everything.  Perhaps my woman’s intuition told me to stay home from a trip to the cabin, or I would have been in a pickle, so to speak.  Speaking of pickles . . . .

The frost didn’t get all my cucumbers!!!