I don’t recall when I became attracted to all the artifacts and memorabilia that my father’s family had accumulated over the years here on the ranch.  Some of it came on the train from Mishawaka, Indiana in 1919 when my grandparents and great grandparents decided to sell out, pack up and head west.  The rest was acquired over a few lifetimes of homesteading and ranching here on Dry Creek.

Over the years I found myself attracted to books, photographs and detritus left in musty trunks or outbuildings.  When I discovered this old lawyer’s bookcase that had been stacked in a pile in the bunkhouse, which had formerly served as lodging for a number of hired hands and in later years as a great place to pitch all the excess baggage from the main house, I was thrilled.  I was surprised to find it there, covered in dust.  I could remember seeing it in the main house many years earlier.  I assumed one of my siblings would covet the antique, which bore a stamp on the face of the top shelf that read “Gunn Sectional Bookcase, Dec. 5, 1899 – Jan. 1, 1901 – The Gunn Furniture Co., Cedar Rapids, MI, USA.”  But I knew I had to have it.

That was almost twenty years ago.  I decided to bargain with my father to acquire the book case, offering to paint the house which was badly in need of it.  I hated coming home to see things getting shabby and by that time my parents were not able to undertake such a project.  I took a week of my vacation, bought the paint at Sears, and worked from dawn to dusk to transform the old house from a peeling, scruffy apple green (which I hated) to a pale gold called “Cactus” with dark green trim.  When I finished up on a Sunday afternoon, I asked if I could load up the book case, which stored nicely in the trunk of my car.  Dad came out to thank me for all the hard work on the house, then said, “you know, you didn’t have to do this.  I would have given you the book case if you had asked for it.”

As time passed, I filled the shelves of the old case with my collection of family junk which nobody seemed interested in but me.  And what a bunch of dandies!  The task of identifying all of it for the purposes of my blog seemed daunting, so I decided to take apart each of the four shelves, make a few notes about the contents, and take my time.

A complimentary packet of needles from Belger Furniture Company of Mishawaka, Indiana inscribed with a promotional gem–“We will let you do the sticking.  We’ll not stick you;” a Jews harp ( I have no idea how it was named such); my father’s infant silver spoon engraved with his initials, “WJU;” a couple old keys; an eye glass that my grandmother wore when working as a young woman in the watch factory in South Bend, Indiana; a pocket magnifying glass; and a sterling silver salt and pepper set featuring a Japanese man carrying two buckets (one for salt, one for pepper).  This was a gift to my grandmother from my Great Aunt Ellen, who traveled the globe and sent her sister gifts from around the world.

A selection of old postcards accumulated by my grandfather Ernest Ullery during his time in the U. S. Army.  The card on top is from the Culver Military Academy he attended in Indiana.  The card in the middle is the soft ball team from Mishawaka sent from a friend to my grandfather.  The bottom card is  dated 9/28/1908 and is a photograph of the Presidio, San Francisco where grandfather was stationed for maneuvers before being sent to the Philippine Islands.

A commemorative book on Japan and the Philippine Islands was one of my grandfather’s mementos he brought home after serving in the U. S. Army. there are a couple large volumes badly in need of restoration that I hope to get rebound.  I am not clear where his travels took him besides the far east. Below it is a program of the Christmas 1906 holiday celebration at the Presidio.

The pipe collection is a curiosity.  I believe the plain round bowl wooden pipe was Dad’s, as he smoked a pipe when I was a child.  The other two are collectibles that arrived from who knows where? 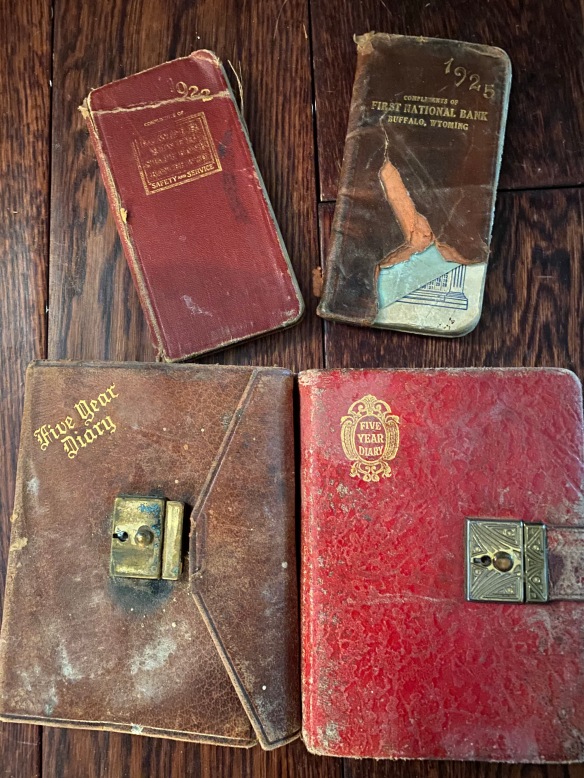 The two small journals above recorded daily weather and events by my great grandfather, Samuel Ullery.  The five-year diaries are his also, and are dated 1936 (red one) and 1932, Renohill, Wyoming.  The Ullery family homestead was just west of Renohill, where Samuel served as postmaster for a period of time. 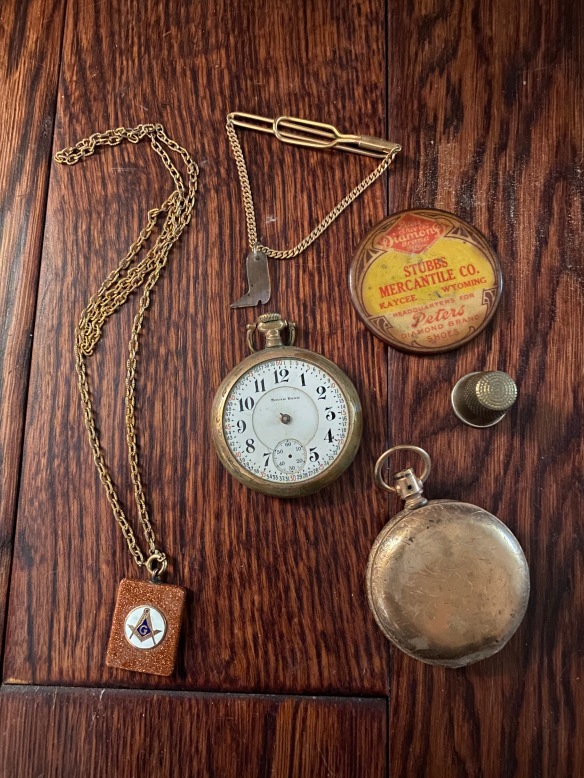 Two pocket watches, a thimble, a tie bar with agate boot, a lapel pen promoting Stubbs Mercantile Company, Kaycee, Wyoming, headquarters for Peters Diamond Brand Shoes.  My Great Aunt Alice was married to Bill Stubbs, a sheep rancher who decided to acquire the Kaycee Mercantile about 1920.  They employed my grandfather as manager until a severe drouth upended the agricultural economy and the store was sold.  Samuel and Ernest decided to take up homesteads nine miles northeast of Kaycee. The Masonic pendant would have belonged to my great grandfather, who was a Mason.  During his career as a building contractor in South Bend, Indiana he constructed the Masonic Lodge.

This well-worn old Bible is inscribed “given to E. S. Ullery, May 1st, 1915 by Samuel Ullery.”   Below is written “this Bible was the property of Louisa Ullery for many years. E. U. ”  Louisa Benner Ullery was the wife of Jesse, parents of Samuel.

An assortment of cameras were handed down from one generation to the next. In the background is a Eastman Kodak Co. printing frame. 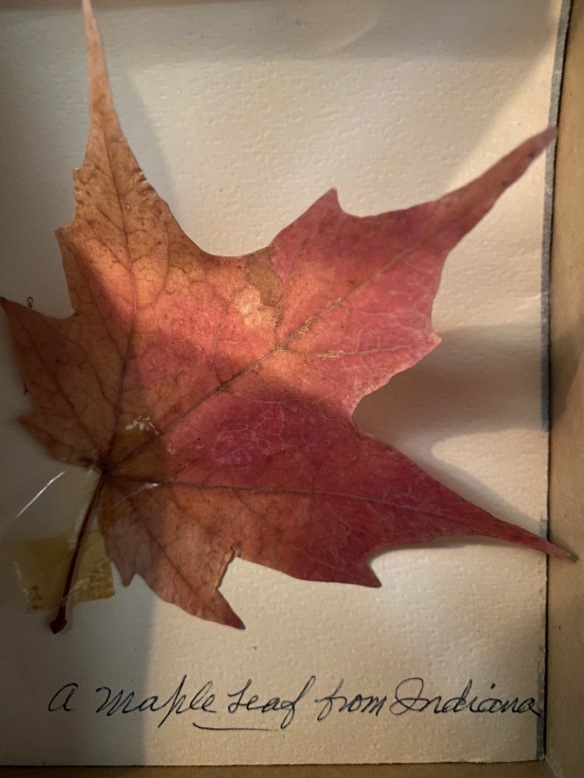 My grandmother Clara’s handwriting is on the background of the leaf she collected and saved.  She always loved her Indiana home but fate led her to migrate to the West as a young bride.  I am sure she treasured this reminder of her former home.

A Montgomery Ward & Co. catalog from 1875 looked dramatically different from the catalogs of my youth, which weighed five pounds and served as door stops, paper weights and reading material for the outhouse.  An ivory cribbage game was likely a gift from Great Aunt Ellen, the globetrotter and the little plastic elephant came from a collection belonging to Michael’s mother.

A pair of blue boots I added to accompany the catalog of the Western Boot Company.  Dad ordered custom boots from this catalog in the 1940’s or thereabouts – date uncertain.  I still have the boots, Style No. 425, “Classy and stylish tulip and leaf inlaid design with three or more rows stitching.  Price $34.50.”  Also in this group, a wool sack needle; leather key holder; silver snuff box (a gift to Dad from someone); a mouth harp and box of sharpening sticks.

A wooden barrel bung, silver napkin ring, and memento from the Pan American games, 1901, most likely my grandfather’s. An ancient pair of child’s scissors and a lapel pin missing the stick pin; pocket knife from Sloan Realty Company and a lock stitch sewing awl from the C. A. Myers Co., Chicago, Illinois.

My grandmother’s button jar, which I explored in an earlier blog is a treasure trove of interesting little items she collected over the years.  The Brand book has receipts for sale of cattle bearing the Ullery brand, which identifies the brand and location on the animal.  The Grange Initiative, dated 1943, certifies E. S. Ullery (my grandfather) as a member of Powder River Grange, No. 68.  The Grange was a farm organization and at that time was the “oldest and strongest” farmers’ fraternity in the world.

Bartlett’s History of Wyoming (volumes I – IV) and the Encyclopedia of Wyoming (volumes I and II) have some family history enclosed.  The hand tooled wallet was Dad’s and doesn’t look like it got much wear.  The various bones, skulls, etc. are things I have a fascination for, don’t ask me why? 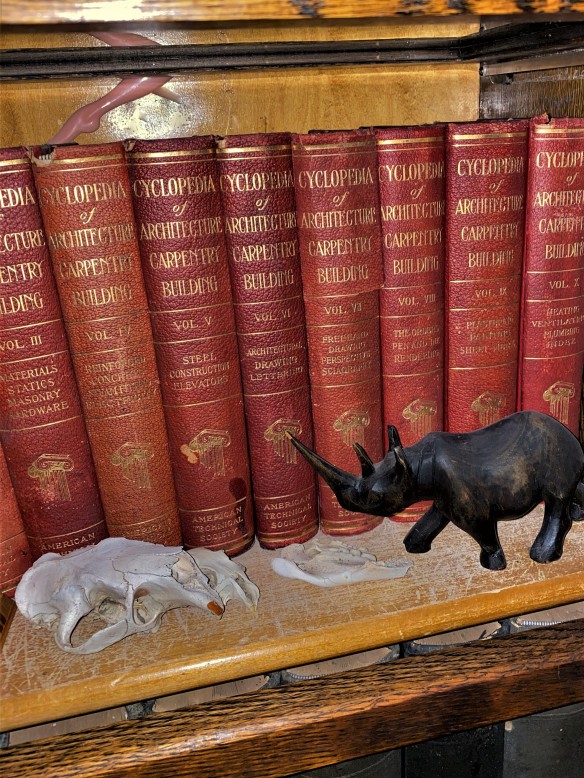 My great grandfather, Samuel Ullery was a building contractor and these books were his.  “Encyclopedia of Architecture, Carpentry and Building” Vols. I – X have instructions and illustrations for building everything from a complicated church steeple to a large or small building.  More from my bone collection, and a wooden rhinoceros of unknown origin. But what about the leg?

The tiny red book is “Reeds Lilliput Dictionary,” Maori-English, English-Maori.  Publisher is A. H. & A. W. Reed, 182 Wakefield Street, Wellington and includes Proverbial Sayings.  Must be another gift from Great Aunt Ellen?  The small block of wood with reversed Indian Pipe brand was a letter stamp used by my father and grandfather.  The pink leg was pinned in between the shelf and back wall of the book case.  I had to pry it out and do not recall ever seeing it before.  It is a promotional letter opener from a manufacturing company, S & S. Mfg. and says “Shape Up Your Sales With.” Hmmm.

Volume II of the Encyclopedia of Freemasonry likely belonged to my great grandfather, Samuel.  I have searched high and low for Volume I, to no avail. 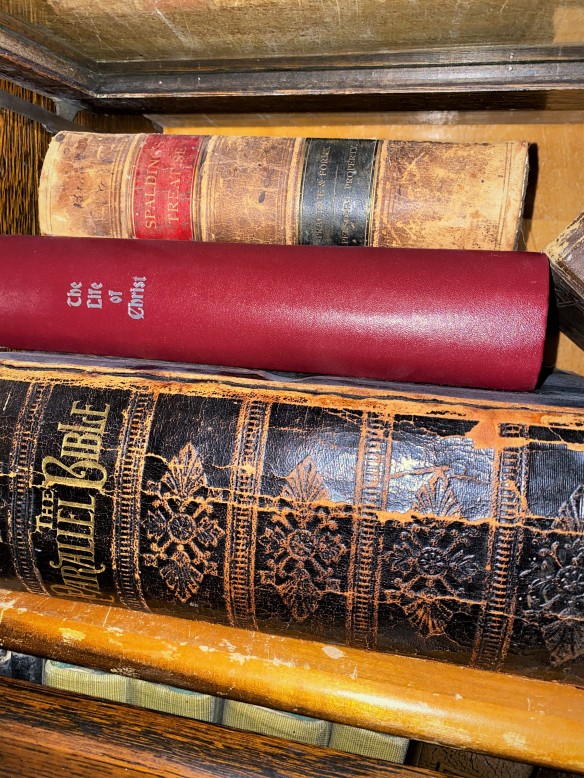 The large book on bottom is the Ullery family Bible with entries from the late 1800’s.  I had the bindings redone and it is holding up fairly well.  The book directly above it was also re-bound and was Samuel’s, as well as the leather-bound “Spaldings Treatise.”

Most of these I presume belonged to my great grandfather’s extensive library.  I must confess, I have not read any of them and don’t know that I possess the intellectual capability (or patience) to try to absorb them.  There is more.

This tattered album contains a wonderful collection of post cards collected by the Ullery family in early times.  Some are delightful.

Ernest send this upon arriving in Manila, Philippine Islands December 3, 1909.  He still had a sense of humor after traveling by ship for 27 days.

This, and all the other postcards in this old album are truly family treasurers.  A previous blog on my grandfather’s time in the Philippines details his experience in more detail.

Cards for holidays, and just whimsy are included.  Ernest wrote to my grandmother Clara using a mirror to write backwards and I guess he wanted his messages to her to be a secret.  They are simply delightful.

Heavy reading for bedtime.  These, along with a group of hymnals, rounds out the fourth shelf, reserved for the most “weighty” of subjects. Also of interest are two bookkeeping journals dating from around 1921.  In them are names and sums of purchases, which must have been customers in the Kaycee Mercantile.  Ernie managed the general merchandise store for the owner, Bill Stubbs.  I know I have overlooked some of the treasurers in the old book case, but I don’t believe there are any more surprises quite as interesting as the pink letter opener!